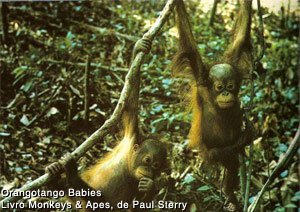 Orangutan, gorilla, chimpanzee, bonobo and human. These are the five great primates, which are so defined because they do not have tails and are a little bit ahead of their cousins monkeys on the evolution scale. Popularly one calls all the primates monkeys, but the truth is that monkeys are the ones who have tails. Africa was the place where the first no-tailed primates appeared. Orangutan appeared between 12 and 15 millions years ago, and after came the gorillas (8 to 9 millions) and the humans (7 millions). Chimpanzees and bonobos must have appeared 5 or 6 millions years ago.

All of them belong to the group of the anthropodes, but chimpanzees are the ones with whom humans most seem to. We share 99,4% of their DNA, according to the researches coordinated by biologist Morris Goodman, from Wayne State University, Detroit (USA). Considering that so small genetic difference, Morris believes that the chimpanzee should be included in the gender human, changing from Pan troglodytes to Homo troglodytes, defining them as human beings.

Morris’ intention is to provoke a new approach about our closest relatives. To make people recognize them as rational and emotional beings, who are only living an evolution time different from our. All over the world, not only chimpanzees, but also gorillas, orangutans and bonobos prove their intelligence and sensibility, which makes that some cases reach tribunals.

One of the most famous cases was the one about a chimpanzee couple from Austria, Hiasl and Rosi, who were not allowed to receive donatives because they were not “people with ID”, even though they watched TV documentaries and practically had a humanized life routine. But there are breakthroughs in “human” awareness all over the places. At Balearic Islands, in Spain, for instance, great primates have already reached the status of “independent adults” and can not be exploited for scientific or trade purposes.

Great Primates in the world

They do tools with branches, rocks and leaves in a process which is very similar to cave men. They have complex social structures, learn to communicate through sign language and to use the computer with the reasoning of a seven-year old child. They can recognize themselves in the mirror and other animals or people in photos.

Socially, some chimpanzees are vey similar to humans. Some of them form bachelors groups, which never assemble families. They are just like those rebel bikers who do not allow women presence and are not interested in having children. They want much freedom and little responsibility.

All, a female chimpanzee who lives in a Japanese research centre, has a unique talent for numbers. She puts them in increasing and decreasing order, memorizes sequences and answers right 90% of the tests, while, in general, people only guess right 40 to 70%.

Gorillas make leaves sandwiches bending the spine side in before eating. This and other techniques to deal with food in the forest are transmitted to the babies. It is a learning process and it is not intuitive, because the youngsters need to learn these techniques with the oldests.

Koko, the first “talking” gorilla, who spent more than 30 years with humans and recently was awarded with a sanctuary, not only learned the sign language, but also created new words to express what she felts and to name things that had not been taught to her in human language. Constant victims of hunters, some leader gorillas (silvered back) have already learnt to break traps and to release monkeys that get stucked in them. Sadly this did not prevent the massacre that resulted in a number of a little more than one hundred individuals, which is not enough for the species to survive. One believes that in ten years gorillas will only be seen in zoos and private sanctuaries.

Bonobos walk on two feet and erect most of the time. While they walk in the woods they can carry bushes that they collect to do their beds. Kanzi, a bonobo raised to behavioral research, understands five thousand words in English, including sentences. He also plays computer’s games.

And these are only a few flashes of a world that we little know about. And maybe, because of that, a great number of people still do not respect it. Get to know other fascinating similarities between humans and great primates visiting CHIMPANZEES, GORILLAS, ORANGUTANS and BONOBOS. Every data and information on the texts was taken from documentaries produced in the last ten years.