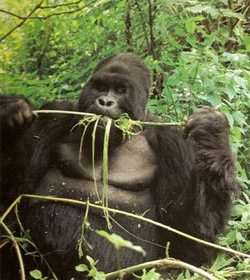 Giant vegetarians near to extinction

Gorillas share 97,5% of human DNA. Considering their size and weight, it is hard to believe that they are nearly extinct. But the fact is that the gorilla is not a hunter. The unique “meat” (if one can say so) that he eats is the one from termites and other little insects. Apart from that, a gorilla only attacks other species in case of self defense and, even though, tries to keep the enemy away by roaring, beating its own chest and breaking branches. As long as corporal fight is the last alternative, gorillas turn to be an easy prey for hunters.

One estimate that a little more than one hundred individuals survive in the wild in Uganda, Rwanda and Congo (Africa), but its habitat is disappearing progressively on account of the growth of cities, agriculture and civil wars. It is very sad that so special species, so peaceful, is disappearing. To gorillas, family life is essential and the males are extremely kind to their babies – which practically do not happen with the other great primates.

Gorillas’ emotion is something easy to notice. In zoos, after a while they stay alone, they get depressed and do not accept anymore company, neither other gorillas nor other species. In wild life, several females had already been found carrying their babies who died from a illness during a lot of days. They face the death of a close relative with much sorrow. The leader, also known as silver-back, gives his life to save the family.

Koko, a gorilla who spent more than 30 years with humans learning the signs language, to use the computer and even to make her up in front of a mirror, is one of the most fantastic examples of the intelligence of these primates. She expressed her will to have a cat, of being a mother and chose a partner through Internet. She had not have babies yet and lives in a private sanctuary together with other gorillas raised among humans.

By Patti Ragan, from Center for Great Apes Losing one of our great ape residents is the most difficult part [...]

World leaders are gathered in Glasgow, Scotland, since October 31 at COP26, the United Nations Climate Change Conference. This event [...]

From Save the Chimps With humans sharing approximately 98.8% of our DNA with chimpanzees, it’s easy to misunderstand them. “The [...]

From Center for Great Apes (CGA) When I first thought of a sanctuary for one orangutan (Pongo) and one chimpanzee (Grub) [...]