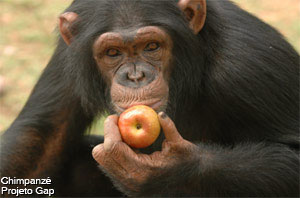 Besides the extremely small difference of 0,6% between the human and the chimpanzee DNA, some behavioral characteristics are also very similar. They have disputes for territory, including the use of rocks and branches as guns, and know how to do “politics”. Yes, that is it. Some chimpanzees catch fruits and donate to other members of the group aiming to gain votes in a following election for leader.

But exactly how it is in humane society, everything is not politics and lies. It is common for them to make friends for all their lives. The most altruistic help the sick and elderly to feed and there is also a sense of justice: if a chimpanzee refuses to share its food, the group punishes him or her and does not let him or her to get near the meat in the next hunting.

Chimpanzees can live in groups up to 70 individuals and 90% of their roaming are on the ground. Like us, they have 32 teeth and clear facial expressions to every kind of emotion, like happiness, anger, depression and fear. The communication by sounds, full of yells and roars, is one of the richest among the primates. They use hands and arms on their greets, kiss each other and also get their hair white in old ages.

Linda, a female chimpanzee who lived in Madrid University Zoo in the 90’s, used to make a fruit mash scraping apples, oranges, carrots and lemons. As long as she had all her teeth pulled off, Linda used her intelligence to create an easy recipe for her to enjoy. Other six chimpanzees from the same zoo, all of them without the teeth, learned to do the mash.