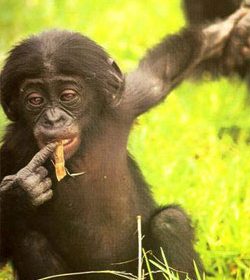 Most known as pigmy chimpanzees, as they are smaller, today they are classified as a species, named Pan paniscus.

Bonobos live in an isolated area on the south of Congo River, characterized by wet forest vegetation and great wet land and no occupied by humans. This zone goes from Congo until the north of Angola. In this area there are neither gorillas nor chimpanzees, which allowed them to inhabit it with no problems regarding to territorial domain.

Bonobos have been wrongly classified as “good and peaceful chimpanzees”, in order to make distinction with their brothers of the north, who are more aggressive. But this vision created by writers in books was based on observation of a few bonobos who live in captivity in zoos.

Bonobos have a different culture of their brothers chimpanzees, because they live isolated, for the environment they live and for the tranquility of their development. Even though, they are not that different from Pan troglodytes.

Nowadays there are less than 300 in captivity in the world and their habitat has been being threatened due to forest and mineral exploitation on their refuge area. There is a bonono sanctuary in Congo Democratic Republic (Congo-Zayre) that fights to preserve these individuals so in threat of extinction.

Kanzi was raised in Language Research Centre of Georgia University and understands 5 thousand words in English, the majority spoken words, not gestures. She knows how to make fire cutting branches and putting fire with matches or lighters and her favorite hobby is computer games.