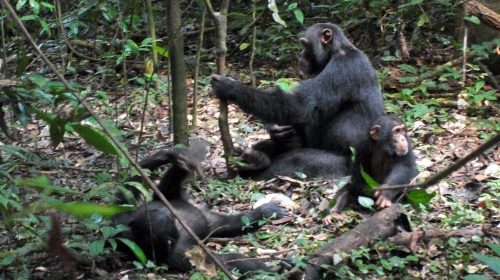 The International Committee of the World Biological Corridor (CICBM) declared as the KILOMETER ZERO FOR CHIMPANZEES a large area in the Democratic Republic of Congo (DRC). The action took place together with the association Paradis des Primatas, which in the last year has been coordinating the formation of unarmed ecoguards with local groups. They will work to promote the conservation with the community and ensure the biological corridor between the Tayna Nature Reserve, the Kisimba-Ikobo Nature Reserve and the Maïko National Park (DRC). The target area is approximately 700,000 hectares of community forests. The actions will be carried out through participatory community conservation, accompanying local communities in the creation of Forest Concessions for local communities.

The CICBM, Great Ape Project and Paradis des Primates signed a mutual collaboration agreement for the defense of biodiversity, for the protection of tropical ecosystems, education for community forest populations and against poaching. The work will help reduce the rate of poaching and defend ecological values ​​that, even if local, affect the entire planet, thus contributing to the fight against climate change. Currently, Paradis des Primates carries out its monitoring activities by locating groups of chimpanzees and other sensitive and endangered species.

The protection of tropical ecosystems such as the Amazon Basin, the Congo Basin and the Jungles of Asia is critical in the fight against climate change. The United Nations has declared that Indigenous People are the main watchers and guardians of the Earth’s lungs against global warming. Native NGOs like “Paradis des Primatas” have been making an effort to safeguard their natural resources, which are the resources of the planet. They want to protect their own Earth, but they need the support to achieve their goals. Therefore, the CICBM and the GAP Project join their struggle.

The Kivu Project (so called because it is being carried out in Kivu Province, northern DRC) has already been transferred to the Ministry of Transition and Ecological Demographic Challenge of the GAP Project, based on the Framework Cooperation Agreement between the Kingdom of Spain and the Democratic Republic of Congo, signed in 2008, which, among other aspects, provides for cooperation in the area of ​​protection and improvement of the quality of the environment with a view to sustainable development.

In addition, in 2007 the Government of Spain signed an agreement on the conservation of great apes and their habitat and currently has an Eco Guards Project that perfectly spans the Kivu Project. Ministry technicians are currently working on this and soon there will be good prospects to help Paradis des Primates.

With the nomination of the CICBM’s world kilometer zero for chimpanzees, the Kivu Project gains an important boost by being part of the Biological Corridor World, which is spreading across five continents, the seas and the oceans. “It is essential that local communities are the ones who protect their biodiversity and give global value to its tropical ecosystems that are so beneficial to the planet. The global biological corridor must extend throughout the Earth in this way to walk hand in hand with nature and walk towards a truly integrated system in the ecosystems that facilitate life in our great biological universe. Great primates, and this time chimpanzees, which are hominids like us; they are from our own family, we share with them countless cognitive abilities and 99% of our genetic DNA, making them eligible to be included in our own “homo” gender. For this reason and many others, they must be protected in their own habitat so that they can continue on their evolutionary path”, declared Pedro Pozas Terrados, Executive Director of the GAP Project Spain and Vice President of CICBM.