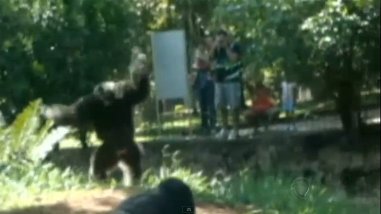 “THE STONE WAS NOT A JOKE, IT WAS A PROTEST”

What a chimpanzee subjected to days , months and years of imprisonment in a tiny space and harassed by a public who verbally assaults and even throws cans and other objects, can do ? A chimpanzee at Belo Horizonte Zoo, in Brazil,l did all he could do to draw the attention of society: he threw a piece of brick at a visitor with a child in his lap, wounding both. See the video here.

This zoo is the same one that has spent millions to bring gorillas from England and Spain, and that does not have an adequate system of protection for the public and chimpanzees do not get hurt, and even more do not have an emergency room to attend any accidents .

The Municipality of Belo Horizonte, which encourages the actions of the Zoo and spends taxpayer money to bring animals to amuse the public, should make the decision once and for all to close it , and convert it into a rescue center for our wildlife, which is so in need of this service .

The act of this chimpanzee was an Act of Protest and not a “joke”, as Zoo officials downplayed the incident .

IF THE CHIMP THREW A BRICK AS A PROTEST, THE HUMANS SHOULD  STOP VISITING THE ZOO TO PREVENT THAT THOUSANDS OF ANIMALS BE SUBMITTED TO THIS TORTURE!

Images of the moment the chimp throws the brick and the man falls with the child in his lap: