A Universal Declaration of the Rights of Great Apes 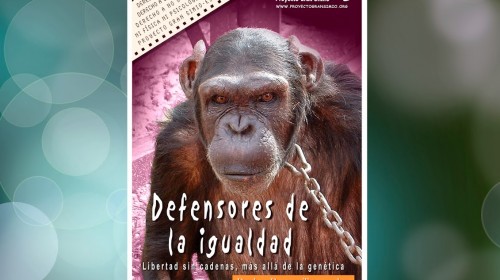 Who looks more like a Human Person: Spanish bank Santander or a Chimp? This amazing and unusual question was asked at an event in the room Clara Campoamor , in the Chamber of Deputies of Spain last June, 8th . The challenge consisted in a manifest read by philosopher and poet Jorge Riechmann in front of an audience of deputies, animal rights activists and the executive director of the Project Gran Simio in Spain, Pedro Pozas Terrados, who launched the idea, embraced by the entire audience.

Banco Santander has legal personality, rights and duties in human society. On the other hand, Chimpanzees and Great Apes are considered as objects, things,  and do not have any kind of personality. They have no rights and can be enslaved, tortured, sold, imprisoned, executed and nobody will be liable for such great injustices.

The Universal Declaration of the Rights of Great Apes, whose approval is intended to be requested to UN  – it is based on the document that was read in that act and is signed by 60 scientists and personalities, and hundreds of others  are joining -, aims to recognize the Great Apes as Non-Human Persons, the minimum acceptable for them to survive after being driven to extinction by humans themselves.

Eight years after being approved, a bill in the House of Spain, which revolutionized the concepts of condition of animals on our planet, and that was shelved for political, religious and other backgrounds motivations, is presented to Spanish Court again, with greater strength and reasons, supported by scientific and cultural experts of the country and worldwide, to ensure once and for all the rights that these species, with whom we share a common ancestor, must have in our societies.

By Ann Gibbons (Science magazine) Disease ecologist Tony Goldberg was stunned in 2016 when he learned that a mysterious infection [...]

Today, GAP Project Brazil was informed about the death of the chimpanzee Martin, who lived in the Buenos Aires Zoo, [...]

Sorocaba, February 7, 2021 With great sadness, the Sanctuary of Great Primates of Sorocaba, affiliated with the GAP Project, informs [...]