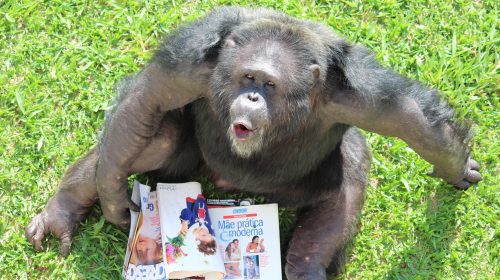 Today’s TBT is a tribute. Exactly 3 years ago the chimpanzee Guga left us. Guga was the first chimpanzee at the Great Apes Sanctuary of Sorocaba, São Paulo, Brazil, and the great inspirer for the information and awareness activities of GAP Project Brazil/International. Because of Guga, the four sanctuaries affiliated to the GAP in in the country today shelter 78 chimpanzees and an orangutan, and other animals, taking them out of situations of mistreatment.

Guga was born in a commercial breeding ground in Paraná, southern Brazil, in 1999. The place reproduced chimpanzees to sell to circuses and zoos. At three-month old, Guga was “adopted” by businessman Pedro Ynterian, who soon realized that the chimpanzee was not a pet. He was then transferred to appropriate facilities at a conservationist breeding site in the interior of São Paulo, which already was home of primates and birds rescued from illegal activities.

In order not to be left alone, the transfer of other baby chimpanzees born in the same place was also negotiated. This led to the commercial reproduction center to be finally closed and the Great Apes Sanctuary of Sorocaba, the largest in Latin America, was born.

Stricken by an overwhelming illness that made him fight, as a good warrior he was, for several weeks, Guga left his nonhuman and human companions from the Sanctuary at dawn on May 27, 2018. Rest in peace, dear Guga. Gratitude for all that he represented and still represents in the fight for the Rights of Great Apes.

By Patti Ragan, from Center for Great Apes Losing one of our great ape residents is the most difficult part [...]

World leaders are gathered in Glasgow, Scotland, since October 31 at COP26, the United Nations Climate Change Conference. This event [...]

From Save the Chimps With humans sharing approximately 98.8% of our DNA with chimpanzees, it’s easy to misunderstand them. “The [...]

From Center for Great Apes (CGA) When I first thought of a sanctuary for one orangutan (Pongo) and one chimpanzee (Grub) [...]

From Save the Chimps Sanctuary A big happy birthday pant-hoot to Emily! At the estimated age of 57, Emily the [...]