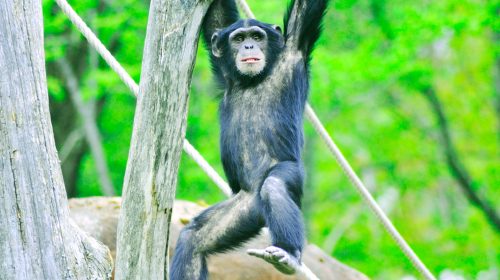 With great sadness we came across another news of chimpanzees’ deaths after escaping from a zoo. This time it happened in Sweden, at Furuviksparken zoo, about 160 km away from Stockholm. According to the news released, yesterday, 12/14, 5 of the 7 chimpanzees who lived in the zoo escaped and were loose for hours. In the end, 3 were shot dead, one was injured, and a fifth reportedly returned to the enclosure voluntarily.

According to the zoo, the decision to shoot was for safety of the people who were in and near the facilities. Apart from that, the zoo affirmed that tranquilizers would not control the situation. Justifications and investigations about the reason of the escape aside, the fact is that episodes like these are recurrent. And they only reinforce the fact that chimpanzees, or any other wild animal, kept in captivity and exposed to visitation is an outdated formula that urgently needs to be rethought.

By Jon Henley and agencies (The Guardian)

Three chimpanzees escaped from their enclosure in a Swedish zoo for several hours before being shot dead, according to Swedish media, while a fourth was wounded and a fifth was believed to have returned unharmed to the zoo of its own accord.

“They are very strong animals and absolutely not domesticated,” Daniel Wikdahl, a police spokesman, told the public broadcaster SVT on Wednesday, adding that it had been the zoo’s decision to shoot the four because of the danger to the public.

Journalists who arrived on the scene after the escape at 1pm said police told them to “get back in your car and leave” for their own safety. The daily Dagens Nyheter said seven marksmen were called in, aided by a large number of police and several drones.

Annika Troselius, a spokeswoman for the Furuviksparken zoo near Gävle, 165km (100 miles) north of Stockholm, said the animals had had to be put down because there was not enough tranquiliser to subdue all of them.

“We had vets on scene, but they made the assessment that we didn’t have enough anaesthetic. That’s why we called for the marksmen,” Troselius told TV4. “This whole situation is tragic in every possible way. We take full responsibility.”

Troselius said the zoo believed the fifth chimpanzee had returned of its own volition. “But this is an ongoing event,” she told Dagens Nyheter. “We have to be sure the last chimpanzees are actually in the enclosure, and this must be done with great care.”

The zoo urged urged residents to stay indoors, lock their doors and close their windows. “Chimpanzees are strong animals and have a high risk classification,” Troselius said. “Our staff are not allowed to work in close contact with them.”

Furuviksparken, which is currently closed for the season, has seven chimpanzees and is reportedly the only primate research station in the Nordic region. It said in a statement it did not know how the animals had escaped, but would investigate.

“We are taking this very seriously indeed,” Troselius said. “Safety is very important to us and our first focus is to make sure no one gets hurt. Then of course we will investigate this so that it can never happen again.”