These chimpanzees, they are amazing people 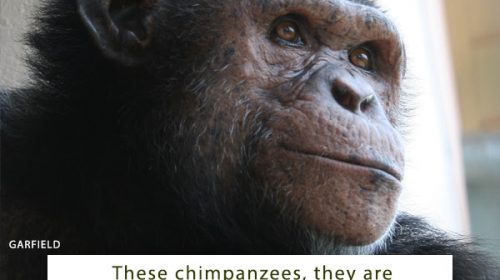 A diary entry from our late founder, Dr. Carole Noon – From Save the Chimps Sanctuary

As you read in the last newsletter we had some failed vasectomies and three babies born to the island group. Quite the comeuppance for Ms. Absolutely No Breeding to be sure. And while these babies are a joy and a wonder, as I knew they would be, this diary entry isn’t about them except that one of them plays a role.

The 21 chimpanzees that the Air Force sent to us in 2001 were picked by the Coulston Foundation. After we took over the place I asked former employees how the chimps were picked and they had no clue. Nor do I as there seemed to be little reasoning behind it.

Coulston sent seven males: five over 40 year olds who were born in Africa, one 22 year old, Waylon, with little social experience but a huge heart and 11 year old Garfield. Garfield is a great big chimp full of testosterone and very little sense. The females sent to us cover a much broader age range, from 40 to 9 years old.

Male dominance gets a great deal of attention when it comes to the social life of chimpanzees but it is a widely misunderstood concept. First, in all the social groups I have known the ‘alpha’ male was only abundantly clear in two of them. In some, females were actually running the group and in others I couldn’t tell who was in charge which makes sense as dominance is a dynamic thing that changes from situation to situation not the classic alpha male role we have all heard about.

It is also not well known that it is the females of a group who pick the leader. Most people assume it is the biggest or baddest guy but not so. In this group, the females have all picked 22 year old Waylon. Waylon is fair and patient and uses just the right amount of force when he decides to become involved. However, Waylon refuses to run for office. You would expect one of the older males to hold this position but they are tired from their life sentences at the Coulston Foundation and this is their retirement after all. And Garfield is just too young to even consider. So no one is running this group.

With no leader Garfield and all his testosterone are running amok and there is no one to reel him in. Without provocation or reason Garfield will run through the cages of relaxed napping chimps and smack them randomly as far as I can tell. The other chimps will sometimes rally and chase him out of the cages but the whole thing is a big upset and Garfield outruns them all so there is no price to pay for this bad behavior.

That is why this installment of Carole’s Chimp Diary is so amazing. A few nights ago at dinner Jennifer and her son, JB, were missing from the lineup. I asked Chance to take the boat around the island and locate Jennifer and JB to be sure they were okay. Chance saw them on the back of the island.

Apparently JB had decided it was time to play on the top of one of the hills as Jennifer watched from below. Jennifer wanted to come in for dinner and was crying but JB had other things on his mind. Twice, Jennifer tried to retrieve him, climbing up the hill, but the little guy was not cooperating. Why she didn’t just grab JB and carry him to the cages for dinner is beyond me but that is what was happening.

It is important to know this as it adds to the story – each meal consists of three courses, for instance, a fruit, a vegetable and a grain like pasta salad or rice. We serve something special at dinner, a fourth course. It is a fruit smoothie in a cup with their vitamin pill on top. This is a ritual we go through every night and the chimps love their smoothies.

Jennifer has been whining from the island all through dinner and now it is smoothie time. Apparently Garfield, our most unreasonable teenage boy, has heard enough and sussed out the situation. He leaves the cages without waiting to get his smoothie and deliberately walks to the island.

Garfield climbs the hill where JB is playing, engages the baby, and then JB follows Garfield down the hill where Jennifer is waiting to pick him up and carry him back to the cages. Garfield returns and gets his smoothie of course and Jennifer gets the dinner we saved for her.

I have seen plenty of amazing chimp stuff but you have to agree this is cool. Jennifer needs help and gets none for some time. Garfield figures out the situation from the cage while eating dinner (I had to send Chance in a boat to the back of the island to gather my information about what was going on) and then Garfield comes up with a plan. He makes a straight line towards the baby, gets JB down the hill, solves Jennifer’s problem in an instant and makes it back in time for his smoothie.

I swear, all of us humans were swooning as we watched this most genius move. And this is just the clever way a young male makes his way to being the leader by wooing the females, being helpful and being smart. These are the first smarts Garfield has shown and the group is so badly balanced in age and he is so out of control that this is pretty much too little too late but it left us all speechless.

These chimpanzees, they are amazing people.

It certainly was not the last time us humans were swooning over Garfield. Since Dr. Carole Noon’s diary entry, Garfield has taken over as alpha, and then passed the role on to his son, JB. Though he still occasionally helps JB with some of the alpha duties in the group, for the most part Garfield is able to sit back and enjoy his golden years. Still, he is a magnificent, regal, and strong male and is treated with great respect by all in his family.