“The Chimpanzee Whisperer”, by Stany Nyandwi with David Blisset: “I am riding in their truck” 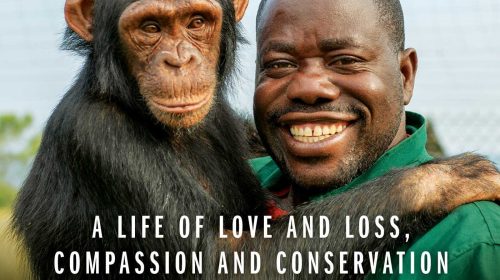 “The Chimpanzee Whisperer” is the memoir of Stany Nyandwi. Looking back over 50 years, we read of his home country, Burundi, a paradise with a bleak colonial history, being turned into “… a land of broken hearts” through a tribal civil war. We read of Stany’s love for his family, wrenched apart through war, poverty, and deprivation. And we read of those who befriended him and saved him; the chimpanzees he met and cared for in sanctuaries, in zoos, and in the wild.

Stany is Hutu, and prejudice against his people has affected him throughout his life and career – often putting him in extremely dangerous situations. As a very young man, Stany worked as a houseboy for Tutsi families, virtually a slave. When he got a job at “halfway house”, a Jane Goodall Institute (JGI) sanctuary in Bujumbura, he was intrigued by the chimps he saw as he worked as a groundskeeper. “I will never forget that moment when Max reached out and touched me” – Max the chimpanzee triggered something in Stany that changed his life.

One thing that strikes you when reading “The Chimpanzee Whisperer” is the phenomenal understanding Stany has of chimps and their behaviour. And the reader can’t help but notice the parallels between the stories of the chimps, and that of Stany himself. The chimps and Stany all enjoyed playing in the forest as children and “killing for fun”. All came from communities with set gender roles and expectations, the females being the dispersers. Forgiveness is central to chimpanzee community cohesion, and was what allowed Stany to overcome hardship and flourish.

Stany and the chimps all underwent hardship as children. For them all, family was the most important thing, but they all lost their families through violence. All are haunted by the atrocities they have seen. The awful experiences of the chimps as infants and juveniles are often acted out through inappropriate and dangerous behaviour, and the book is full of incidents of Stany calmly walking towards chaos that all around him are fleeing. Stany doesn’t see the chimps as the ‘other’, but sees himself as part of their community.

Apart from Max the chimp, Stany met another influential person at “halfway house” – the Australian zookeeper Debby Cox, who has also dedicated her life to chimpanzees. “Without a word, Debby ran and dived into the lake to save Kidogo” – a chimpanzee who had been tranquilized but climbed into a tree hanging over the lake before the drug had kicked in. Although having little schooling, Stany was a quick learner, and couldn’t have had a kinder or wiser human role model than Debby.

As the situation worsened in Burundi, Stany and Debby’s fortitude was tested. They faced difficulties caring for the chimps as the country descended into chaos. There are terrifying episodes where the sanctuary staff are confronted by soldiers. Finally Debby and Aly, from JGI Burundi, had to face the logistical challenge and bureaucratic red tape of moving the sanctuary’s 20 chimps to Sweetwaters Sanctuary in Kenya.

The final administrative hurdle was jumped thanks to Poco, a chimpanzee who charmed the government minister who had the final say. By now Stany had married Nowera, and he made the difficult decision to go to Kenya with the chimps, leaving his growing family behind. “I loved the chimps, they were my family.” This is where Stany started travelling to different countries to work with chimpanzees.

“The Chimpanzee Whisperer” is informative and brutally honest. It tells of the varying habitats of chimpanzees and how there has been an 80% decrease in their numbers during Stany’s lifetime. It tells of the importance of paying attention to the chimpanzees: “If you want to work successfully with chimps, then you need to know them – as a species, as a community, and as individuals.” Stany explains how caregivers must fit into the chimp community hierarchy.

The complexities of human / wildlife conflict are explained, as are the difficulties of integrating orphaned chimps into communities, and the barriers to releasing sanctuary chimps into the wild. And the book talks of loneliness and despair, and the ease of falling into alcohol abuse. There is a description of a very difficult time when Stany made a mistake that led to his losing a job he loved, and ending up in a cage like his chimpanzees. It is hard reading. But “The Chimpanzee Whisperer” also talks of the important of faith and forgiveness: “… sometimes, when science and logic fall short, love and faith and hope do rise.”

Stany worked in Burundi, Kenya, Uganda and South Africa. He travelled to Australia, the U.K, Germany, and the U.S. He visited and worked at zoos and sanctuaries. He visited Gombe and saw behaviours in wild chimps that he recognized from the habits of sanctuary chimps. He worked with communities to reduce human / chimp conflicts arising from habitat reduction. In many places he felt lonely and depressed, and found love and acceptance with the chimpanzees.

There are funny yet awful scenes, such as Stany not being able to exit a lift in a hotel, as there was an armed soldier in the hallway – and he didn’t trust soldiers. And Stany writes of the wonders of other countries: kangaroos, drink dispensers, gay weddings, super-fast trains, “magic” refrigerators, and vast stores the size of towns.

When Stany worked with Debby at Entebbe Zoo in Uganda, Debby had the idea of establishing a chimpanzee island. This was to become Ngamba Island Chimpanzee Sanctuary. And as I have been there a couple of times, it was fascinating to read of its beginnings, and the anecdotes of some of the chimps I know:

Kidogo walking “like a boss chimp” before the arrival of the adult males. The reign of Mika, the legendary alpha. The description of the chimps “touching each other for reassurance” when getting to the end of the raceway and facing the forest for the first time. Katie picking up a dropped key and walking over and unlocking a padlock in the holding facility. Okech using wet leaves to clean food that had got muddy. Mawa ending up in possession of a loaded AK-47!, Becky and Sally getting into the staff beer supply and being found passed out in one of the caregiver’s beds…

And there are really moving sections in the book, Stany’s reuniting with his family after they had been “trapped in the middle of a place like hell”. The problems for Nowera in a strange land, wearing the same clothes every day, with Stany often not able to provide enough food. And despite all this, Stany and Nowera taking in other children without a thought. The sadness of so many divisions in society, tribal, ethnic, religious. And the reminder of the colonial past, with colonial conservation patterns causing issues with current programmes: “Saving chimps or elephants or gorillas … that’s the white man’s business.”

The book is an engaging read and is illustrated with colour photographs, there is even one of ‘Sunday the Boatman’, a Ngamba chimp who didn’t just raid fishermen’s boats off the coast of Ngamba, he frightened the fishermen off a boat and took it for a sail on the lake. The enduring presence in the book is Stany’s calm confidence, with which he protects himself, others, and the chimpanzees. Stany has won many international awards for his work, he is the subject of the movie Pant Hoot, and he is still working at Chimp Eden Sanctuary in South Africa.

Stany believes that, although not ideal, sanctuaries are a good solution for orphaned chimpanzees. “The Chimpanzee Whisperer” has practical suggestions for measures to help chimps, and a list of organizations and sanctuaries to support. In Aotearoa we have a saying he waka eke noa – we are all in this together. And Stany has a similar saying “riding the same truck”, and for chimpanzees he says “I am riding in their truck”. “The Chimpanzee Whisperer” is a great read. Reminding us we should all be riding the same truck! *Alyson Baker lives in Whakatū Nelson, Aotearoa. She is appalled by the predicted rapid path to extinction of so many animals, and also by the way many of them are treated, especially chimpanzees. Alyson volunteered at the Ngamba Island Chimpanzee Sanctuary, Uganda in 2017. She returned to Ngamba in 2018 and also went chimp tracking in Kibale National Park. She was planning to go back to the sanctuary in 2020, and to visit Budongo Forest Reserve in hopes of seeing the chimps who live there, but Covid-19 intervened. In 2021 Alyson completed an MA looking at our moral responsibilities to chimpanzees.