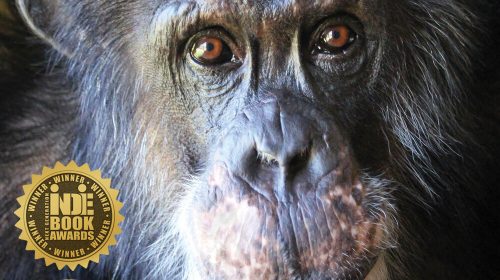 “Chimps do not belong to us and they certainly do not belong to science” – the simple message behind The Chimpanzee Chronicles, a statement written by Adriana Martin in her contribution to this wonderful, if harrowing, collection. The contributions detail the lives of chimpanzees in captivity; in laboratories, in zoos, being used for entertainment, and even the sadness of those lucky enough to live in caring sanctuaries. As Martin describes the human/chimp conundrum, each form of captivity is “a lose-lose proposition.”

The Chimpanzee Chronicles is full of heroes: Enos, the five-year-old chimp shot into space, who perfectly performed his tasks despite being constantly tortured by an electrical malfunction. Some of the staff at The Laboratory for Experimental Medicine and Surgery in Primates (LEMSIP), who formed an ‘underground railroad’ to ensure some of their chimps didn’t end up in the worse circle of hell that was The Coulston Foundation. All the chimps who managed to retain their sanity and personhood despite years of unending stress. The humans who work in dangerous conditions to protect chimps who have been orphaned through conflict, greed, and ignorance.

There is a common arc through most of the stories: the first moment of falling in love with a particular chimpanzee, the decision to dedicate yourself to working on behalf of chimps, the brief period of feeling you are doing good, and then the realisation that you are part of the problem. As explained by Diana Goodrich: “As a caregiver, I am in an awkward position. While I am friends with the chimpanzees, I am also the one who makes sure the locks and the fences are secure so that the chimps remain captive.” All the narrators are aware that, as Rosa Garriga puts it, “Chimpanzees belong to the forest, where they have their own set of laws, their own culture.”

As you read through the book, you get to know individual chimps through the eyes of various narrators. You learn about the different sanctuaries, and the different research facilities. You read of the abuse, intentional and unintentional, inflicted on the chimps. You read about chimps raised as human children, and their confusion when they are then placed in facilities and treated like animals. How using chimps in even benign research, infantilises and demeans them. It seems so obvious as you read this collection, that if to do science you must ignore the personhood of your subjects, you should not do that science. Put perfectly by Nancy Megna: “… torturing other beings should not be an option.”

The narrators are caregivers, a film maker, primatologists, researchers, an eight-years old boy, and a man who plays music to raise funds for chimp sanctuaries. Most of the pieces are in essay form, one is written as entries in a diary, and they vary in length and style. All are incredibly honest, saying how conflicted the narrators are, how some prefer it when the chimps are unforgiving and violent, as the forgivingness and gentleness of most survivors is so confronting. One narrator, Hilda Tresz, had an extremely negative first encounter with chimps, yet still felt compelled to help them. All the pieces are moving and lavishly illustrated with black and white photographs.

“Perhaps the greatest lesson I have learned from my chimpanzee family is that saving another’s life can help save your own,” Jenny Desmond expresses another theme of the collection; all the narrators find something about themselves by helping the chimps. Many have mementos they keep with them; Allison Argo has a piece of concrete from the Coulston cell blocks, Debby Cox a key signifying Amisero, the young chimpanzee Cox helped release from chains in Burundi. The situation the chimps are in becomes a metaphor for all that has gone wrong with our society. As Cox says, “If we, as humans, cannot make the effort to respect and protect chimpanzees, what chance do we have of protecting the rest of our planet?” The chimps belong to the wild, but the wild is a diminishing place.

Parts of the collection are indescribably sad. There is tragedy in the caregivers being free to move on, sometimes leaving the chimps’ situations to revert to what they were before they arrived. Constant throughout the collection are stories of the removal of babies from their mothers, either in the wild by poachers, or in the labs by scientists. And there is a poignancy to the simple measures that help alleviate the boredom and suffering of captive chimps; allowing them to make choices, giving them interesting things to manipulate, trying to re-create some of the conditions they might have encountered in the wild. And, although we all know using chimpanzees as entertainers in film, TV, in ads and on social media, is wrong as it encourages the pet trade, The Chimpanzee Chronicles makes it very clear that such use is based on cruelty and abuse.

Decisions made on behalf of the chimps can also be cruel, for example deciding that for their own good some chimps should be kept isolated, as they might not integrate with others – when isolation for a social chimp must be a nightmare. And for biomedical research, some chimps were held in isolated cages for decades. The most chilling moment of reading for me, was the description of the encounter between the hepatitis-positive chimp Bruno and Mark Bodamer in the LEMSIP facility. It was an exchange echoed later between Adriana Martin and chimp Moja in the Chimpanzee and Human Communication Institute. The clear and unequivocal expression of a conscious desire which could not be met.

The Chimpanzee Chronicles is a wonderful collection of observations, stories, and experiences, that makes the reader aware of the unconscionable toll human conceit has demanded from thousands upon thousands of chimpanzees. Like the narrators, it is hard to see a way forward, but we must keep working on behalf of chimps. We must try and address the plight of those captive chimps who have yet to get to sanctuaries, address the conditions that put wild chimps at risk from poaching, and address the obstacles to ensuring wild chimps have the opportunity to live, as Mary Jane Jensvold puts it, “Free in the forests and savannas of Africa.” * Alyson Baker lives in Nelson, New Zealand. She has always been interested in wildlife and is appalled not only by the predicted rapid path to extinction of so many animals, but also by the way many of them are treated, especially chimpanzees, our closest relatives. Alyson volunteered at the Ngamba Island Chimpanzee Sanctuary, Uganda in 2017. She returned to Ngamba in 2018 and also went chimp tracking in Kibale National Park. She was planning to go back to the sanctuary this year, and to visit Budongo Forest Reserve in hopes of seeing the chimps who live there, but Covid-19 intervened.

From Save the Chimps Sanctuary Perhaps you’ve carved pumpkins, drank your pumpkin lattes, and enjoyed your pumpkin spice. Well, now [...]

It’s children’s week in Brazil and we would like to share some play time moments of chimpanzees from the Great [...]

From The Center for Great Apes (CGA) In spite of a pandemic, our mission and work to help great apes [...]