Some Monkeys Entered The Stone Age More Than 3,000 Years Ago 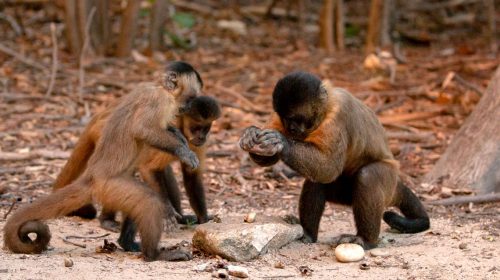 Brazilian tool-using monkeys have not just been engaging in the practice for far longer than we realized, they’ve also changed the way they use stone tools over time, going through recognizably different styles over thousands of years.

Three years ago it was announced capuchin monkeys were using stone tools and had been for some time. Last year the same thing was reported with a different monkey species, this time showing signs of it being a recent development, adopted by a small population of white-faced capuchin monkeys in Panama.

In Serra da Capivara National Park bearded capuchins use stone tools to crack nuts, dig the soil, process fruits and seeds, and even engage in sexual displays. Now, new research suggests they may have been doing this for 3,000 years.

One obvious question was whether monkeys had learned from seeing humans use tools. If this was not a case of monkey-see-monkey-do, it raises the possibility capuchins may have beaten humans and chimpanzees – the only non-human animal with an archaeological record – to discover stones’ uses.

By excavating a site where monkeys bring stones to open cashew nuts, Dr Tomos Proffitt of University College London found 1,699 stones that might have been used as tools spread over the area and buried less than 77 centimeters (31 inches) deep. Of these, 122 were confidently identified as having been used by capuchins based on marks on their surfaces, Proffitt and colleagues report in Nature Ecology and Evolution. The stones appear to have been brought to the site from the bed of a nearby seasonal stream.

The deepest stones found so far were deposited in layers almost 3,000 years old, roughly 450 generations ago.

Proffitt found four distinct phases indicating different approaches to tool use. The oldest period (Phase IV) lasted from 3,000 to 2,400 years ago and involved small, light stones that were all extensively worn, indicating repeated use. The monkeys appear to have been using the stones on small targets, leading them to often hit the anvil stone below instead.

A long period followed where no tools were deposited at the site, although we don’t know if the local monkeys stopped using tools only for their distant descendants to rediscover the idea, or if the same activities continued elsewhere. Phase III, occurring 640-565 years ago, had tools that looked similar to Phase IV.

However, after a shorter period of abandonment Phase II began 257 years ago, this time with notably heavier stone hammers, as well as bigger anvils, consistent with the capuchins’ larger and harder foods. Recent remains are different again, with a wider range of hammers, and a shift to using roots and branches of cashew trees, rather than larger stones, as anvils.

Humans have been in the area, using more advanced stone tools, for thousands of years, so we can’t tell if the monkeys picked up the idea from us or, as senior author Dr Michael Haslam has previously suggested, humans learned how tasty cashews are from watching monkeys.

By Max Kendix “Don’t worry everyone, this is the last one on Singer”, our ethics professor announced last term. The [...]

Female chimpanzees are also important in helping to win and keep a territory In humans, warfare and territoriality have traditionally [...]

Chimpanzee Cecilia, 22 years old, became famous worldwide in April 2017, when she was transferred from Mendoza zoo, in Argentina, [...]

By Patti Ragan, Founding Director CGA After nearly three months of following our COVID-19 protocols, we want to let you [...]

Chimpanzee Black completed, at the beginning of May, a year in his new home – and life – at the [...]

From PASA – Pan African Sanctuaries Alliance We just received an urgent message from HELP Congo, a PASA member in [...]

From Save the Chimps Sanctuary Terry wasn’t going to give up on his friend Cayenne. Every day he’d venture out [...]

From Center for Great Apes We have a special announcement to share with our friends and supporters. In our 27-year [...]