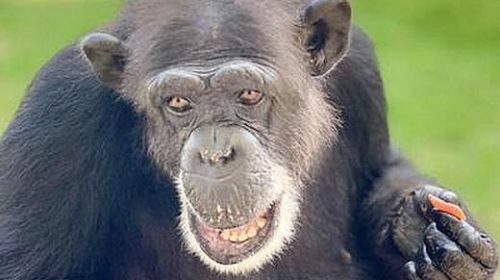 Amy (Save the Chimps)

Amy was born on February 2, 1983, at the Holloman Air Force Base in New Mexico. She was taken from her mother within two hours of birth – even though it’s noted that Clair was a good mother.

At just one year old, Amy was sent to a laboratory in Maryland, where she resided for two years, and was used to test a hepatitis B vaccine. Tests required her to be restrained weekly for liver biopsies and blood work. Once the study was complete, she returned to Holloman Air Force Base and was entered into the breeding program but never gave birth to any children.

Amy was among the 21 chimpanzees rescued from the US Air Force in 2001. Here at our Florida sanctuary she was finally able to go outside of a cage and set foot on grass for the first time. Caregivers lovingly called her the ballerina for her tendency to twirl while hanging from the high bars. She was immediately known for her joyous personality.

In 2003, three babies were born into her group, as the result of a failed vasectomy in Garfield. Although Amy never had any children of her own she was an amazing “aunt” to these babies. She especially doted on baby Angie and the two could often be found snuggling.

Amy’s caregivers describe her as friendly and unassuming, often with a smile on her face. We can only hope that this means she has little memory of her difficult past. She loves spending time with her fellow Air Force veterans, Liza, Emily, and Jennifer on the wide-open spaces of their island home.