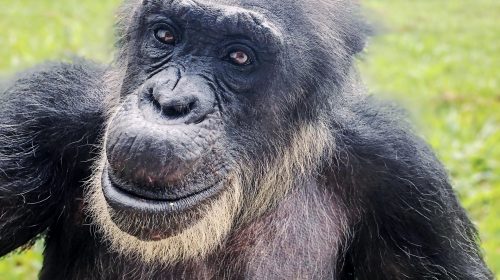 With great sadness, the Sanctuary of Great Primates of Sorocaba, affiliated with the GAP Project, informs that the chimpanzee Black died yesterday, 02/06, at 21:02, due to cardiac arrest.

On Thursday, February 4, Black showed lameness and mild apathy. He was then medicated and anesthesia was being planned for a complete health check up. Unfortunately he passed before it. The necropsy was performed and the cause of death will be concluded after the result of histopathological exams (microscopic analysis of tissues).

It is unclear where Black was born and his age was estimated to be 50 years old. He was exploited in a circus when he was young and after years of suffering he was sent to a zoo. After being stung by a scorpion, he arrived in 1979 at the Sorocaba Zoo. There he lived for about 40 years, the last 8 of which were completely alone, after the death of his partner, Rita, in 2011.

In 2004 he spent a brief period at the Sanctuary, when his enclosure was undergoing renovations. Since then, several attempts have been made to transfer Black definitively to the Sanctuary, among them an intense public campaign led by the GAP Project with support from the United Nations’ GRASP – Great Apes Survival. Finally, in May 2019, after another law suit filed by NGOs in 2018, Black was transferred to the Sanctuary by court order.

Black adapted to the Sanctuary quickly and was very sociable. He didn’t like being alone. He enjoyed these two years with the company of the chimpanzee Dolores, in full harmony. He liked to walk around the enclosure, tunnels and houses, and also enjoyed following the lives of groups of neighboring chimpanzees.

Rest in peace, dear Black. Your story will never be forgotten.