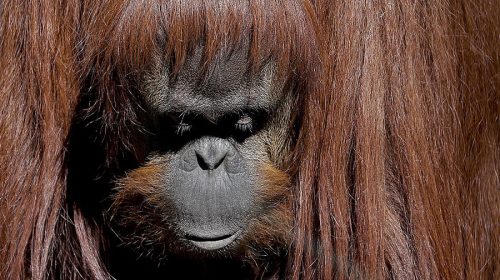 Orangutan Sandra, who moved from Buenos Aires zoo to a sanctuary in Florida (Natacha Pisarenko-AP)

In a forested reserve in central Florida, Sandra is settling in to her new home. Thanks to a 2015 ruling by a judge in Argentina, her new life represents another hole in the increasingly porous wall separating humans from nonhuman animals.

The 33-year-old orangutan is, according to Buenos Aires Judge Elena Liberatori, a “nonhuman person,” and thus entitled to some of the legal protections enjoyed by Homo sapiens, including the right to humane living conditions, which she is now enjoying at the Center for Great Apes in Wauchula, Florida.

For Minnie, an Asian elephant at a Connecticut petting zoo, a move to a sanctuary is not so clear. In a last ditch effort to apply the “person” label to Minnie, the Florida-based nonprofit Nonhuman Rights Project filed a supplemental brief with the Connecticut Appellate Court arguing that, as a person, Minnie has rights of bodily liberty protected by habeas corpus (a writ not issued in the Argentine ruling). The appellate court could hear the issue as early as January.

Sandra’s resettlement and the legal wrangling over Minnie are this month just the latest instances of a broader shift in how the public is understanding the moral considerability of nonhuman animals. Current law classifies animals as things, with no legal standing. In recent decades, science has revealed that a variety of nonhuman animals appear to share traits once believed to be unique to humans. Philosophers, activists, and legal scholars, spurred on by an increasingly animal-conscious public, have been working to establish the moral standing of our fellow animals, to shift their status from property to person.

“There’s definitely more concern about nonhuman animals than even 10 years ago,” says Lori Gruen, a philosopher at Wesleyan University who specializes in animal ethics. “I think it’s also true that so many people are continuing to use animals in a variety of contexts.”

This concern applies to not only high-profile cases like Sandra and Minnie, but to the thousands of elephants, dolphins, orcas, chimpanzees, and other mammals known for their sophisticated cognitive abilities that are held in laboratories, zoos, animal theme parks, and roadside attractions.

Among these are more than 44 elderly chimpanzees at the National Institutes of Health-supported Alamogordo primate laboratory in New Mexico. The chimps were originally set to be settled at a federal chimp sanctuary in Louisiana, but the NIH reversed its decision, after concluding that the chimps were not healthy enough to be relocated.

Professor Gruen and many animal welfare groups have denounced the reversal. “Chimpanzees are remarkable individuals who are tremendously resilient,” she wrote in an email to the Monitor. “We have caused them to suffer in innumerable ways. Keeping them away from a more satisfying life at the sanctuary because of what we have done to them doesn’t make sense ethically.”

Public sentiment in the US regarding nonhuman animals seems to be shifting in favor of animal rights. In 2015, Gallup found that nearly a third of Americans said animals should be given “the same rights as people,” up from 2008 when just 25% said so. Just 3% in the recent survey said animals “required little protection from harm and exploitation.”

The trend may be accelerating: A 2018 poll that replicates the Gallup poll questions found that nearly half of U.S. respondents said animals should enjoy the same rights as humans, and that nearly 9 out of 10 support some form of legal rights for animals.

But Garrett Broad, the Fordham University communications professor who conducted the poll, cautions that “rights” and “animals” can mean different things to different people, as he learned while conducting focus groups.

“I found actually a wide variety of actual perceptions within those groups about what rights they actually think animals should have,” he says. “Some folks in answering that question, in their mind’s eye, were really only thinking about companion animals like dogs and cats.”

Nevertheless, the rise in support for animal rights is paying off, at least for some animals.

In September, California joined New Jersey and Hawaii in banning traveling animal acts involving most animals. These state bans have shut down a number of circuses around the country, including two of the biggest: Ringling Bros. and Barnum & Bailey Circus and Cole Bros. Circus.

“I’m hopeful – not necessarily optimistic – that in the next few decades we’ll really start to ask what a future political and cultural system might look like that gives animals the consideration that I and many others think they deserve,” says Professor Broad.

Personhood, or something else entirely

But should that future system assign personhood status to animals? Professor Gruen, whose website, The Last 1,000, tracks the remaining chimps being used in American biomedical and behavioral research, isn’t so sure. She agrees that, classifying, say, a chimpanzee, as an item of property falls short. “There’s something special about their cognitive capacities and their emotional capacities and their ways of being that make them quite different than, you know, toasters,” she says.

Yet she cautions that, by expanding the concept of personhood, we end up measuring nonhuman animals’ moral considerability in terms of traits that are important to us – such as problem-solving ability – and not the things that makes animals’ lives meaningful to themselves.

“Part of the worry I have is that it’s too much of a human-centered framework,” she says. “And it would also leave out some of the animals who might not seem as close to us cognitively or emotionally, but who are nonetheless worthy of thinking about as ethical beings that deserve our attention.”