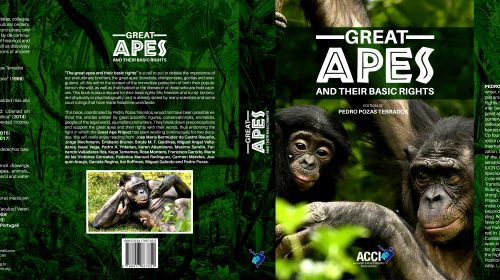 Read the article by Pedro Pozas Terrados, Executive Director of PGS, about the book:

Book “THE GREAT APES AND THEIR BASIC RIGHTS”

There are countless scientific evidences that show us the genetic approach and the cognitive abilities of great apes (chimpanzees, bonobos, gorillas, orangutans and humans), sharing the same evolutionary path within the hominid family and even suggesting, as Morris Goodman, the father of molecular biology, that chimpanzees and bonobos must be classified within the genus homo.

GAP Project has been fighting for more than 20 years for the basic rights of our evolutionary brothers. We were criticized and attacked by the media and political parties, like Darwin and Lucilio once were. But despite this, committed and altruistic men and women who defend great apes in different parts of the world in this NGO have demonstrated over the years how thousands of scientific reports have endorsed our struggle, overthrowing those who wanted to ridicule us.

Due to all these reasons the book we refer plays an important and historical value. With the coordination of Pedro Pozas Terrados, who also writes a series of articles of great importance, another 20 people – renowned scientific figures, conservationists, animal advocates, lawyers, journalists and writers -,  all gathered in a single work, demonstrate the essential need to protect populations of great apes in the wild and that their basic rights are recognized worldwide.

For this, the book is divided into six main and very well defined chapters, where specialists in the field show us and present their arguments in defense of the great apes.

THEIR LINEAGE: Presents a journey through human genetics, demonstrating the connection between those who are part of the Hominidae family.

THEIR HABITAT: Reporting the deep connections between humans and great apes, the conservation of their habitat, the genocide in which the majority of their populations are immersed and the presentation of the new species of great primates recently discovered in Sumatra (Indonesia) and where they are in serious risk of extinction.

THEIR CHAINS: Articles about captivity and public denunciation of how, without committing any crime, we lock them up in zoos or use them in circuses like human clowns. It also tells the story of The Great Apes Sanctuary of Sorocaba, a city of chimpanzees, and how, rescuing them from circuses and zoos, they formed a large community in Brazil. A booklet of 70 color photographs illustrates this chapter, featuring the majority of chimpanzee who live in Sorocaba. It also shows how photography can help in the fight and in raising awareness in the so-called “photoactivism”.

THEIR FUTURE: This chapter is about the uncertain future of great ape populations in nature, a complement linked to the chapter “Their habitat”. It analyzes the CITES Convention, which regulates trafficking in species due to its ineffectiveness. Their threatened coexistence and other reflections proposed in conjunction with the defense of the Earth and all its global ecosystems, ending with a discussion considering them “special beings”.

THEIR RIGHTS: After reviewing the situation in which the great apes find themselves, in this more extensive chapter the authors speak openly about their basic rights, their inclusion as “non-human persons”, the need for them to be declared as part of the Living World Heritage, the defense of their lives and other very interesting arguments that undeniably support their legal rights and freedoms.

THEIR MANIFESTOS: This chapter is extremely important, as it presents a series of manifestos in defense of the great apes, so that they can be taken to International Organizations and to the national law courts of all countries of the world. After making an appeal to the Universal Great Primate Law, a draft law is presented that can serve as a basis for each country to adopt according to its own legislation. They are followed by the manifestos “The great apes as living world heritage”, “recognition of the great apes as nonhuman persons” and “chimpanzees and bonobos must be included in the homo genre”. All of these manifestos, as well as the law, are supported by all who write in this book.

The book, in addition to the photo booklet, is illustrated by drawings and photographs, many of them also in color.

The editions in Spanish and in English was made possible thanks to the sponsorship of Pedro A. Ynterian, director and owner of The Great Apes Sanctuary of Sorocaba, and also General Secretary General GAP Project International.