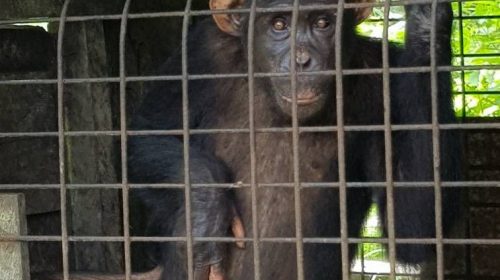 Captain, a young chimp, has endured constant abuse and neglect in his short life. When he was an infant a poacher slaughtered his mother in front of his eyes, then captured and sold Captain as an illegal pet. He was alone, torn from the safety and care of his mother’s arms. Though he survived this horror, I can’t imagine he will ever forget the terror of his captivity.

The people who bought Captain put him a tiny cage and they didn’t let him out for the next 11 years. They didn’t care that he was utterly frightened and crushed by his isolation. Terrified to be alone, Captain would scream and cry.

PASA learned about Captain and contacted Parc de la Lékédi, a PASA member in Gabon. They quickly came to free him.

The Long Road to Recovery

Captain is safe and receiving the medical treatment he desperately needs.

After spending 11 years in a cramped cage, it won’t be easy for Captain to adjust to walking, climbing trees, and even simply even being outdoors.

To recover from the brutality he endured, Captain urgently needs round the clock care and extensive medical treatment. Only you can make this possible.