PASA/Africa: Give 25 monkeys a chance to be free 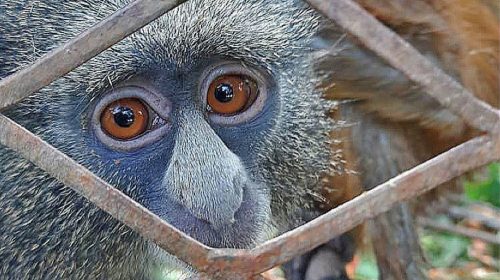 Right now, PASA is conducting our largest primate rescue ever – and we desperately need your help.

In September, a truck smuggling monkeys from the Democratic Republic of Congo to South Africa was intercepted in Zimbabwe on a route that some investigators believe is commonly used to traffic wildlife before exporting them overseas. For two months, the monkeys have been trapped in cramped cages without proper care at a border checkpoint.

When PASA was alerted to this situation, we immediately began to map a path to safety for the illegally transported animals, some of which are endangered. If the monkeys aren’t sent to a sanctuary, they will likely be forced to live at an appalling tourist attraction for the rest of their lives.

Fortunately we received promising news: the 25 monkeys can be transported to PASA member JACK in the DR Congo.

JACK typically rescues chimpanzees, not monkeys. However, this rescue is so critical for fighting the wildlife trade as well as for the welfare of these animals that JACK has stepped up to provide a home for the monkeys. PASA will work with JACK to ensure that as many of the monkeys will be returned to the wild as possible.

But first, JACK urgently needs to build enclosures so they can accept the monkeys. See how you can support this action here.

Today, GAP Project Brazil was informed about the death of the chimpanzee Martin, who lived in the Buenos Aires Zoo, [...]

Sorocaba, February 7, 2021 With great sadness, the Sanctuary of Great Primates of Sorocaba, affiliated with the GAP Project, informs [...]

From Center for Great Apes In this time of uncertainty, there is always hope – that together we can do [...]