Open letter to a Great Judge 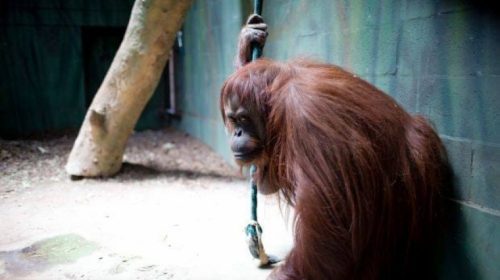 In 2015, Judge Elena Liberatori, head of Court No. 4 of Administrative and Tax Matters of Buenos Aires, Argentina, made history in world legislation, recognizing the Orangutana Sandra, who lives for 25 years in the Buenos Aires Zoo, in the Barrio de Palermo, as a juridical personality to be judged by a Human Court and grant her the freedom of the slave life, which she had in public exposure.

The Buenos Aires Zoo is now in the conversion phase into an Ecoparque, eliminating the exposure of animals. Some animals have already been negotiated and transferred to other Zoological centers in the world, but Sandra continues alone and awaiting her destiny and her freedom.

The Ecopark has decided to send it to a Sanctuary in the State of Flórida, United States, which has Orangutans and Chimpanzees. But to enter the North American border, a complicated and delayed process is required, which puts the life of Sandra at risk and impact the finances of the Municipality of Buenos Aires, in a moment of great financial crisis.

As a way of advising the Illustrious Judge and informing Argentine public opinion, which has strongly criticized the decisions that the Palermo Ecopark has imposed, without being able to clearly explain the reason for the North American option, when in the State of Paraná, two-hour away flight from Ezeiza and with the total cost assumed by the Brazilian Sanctuary, the option was discarded; We compare both options.

Please, Illustrious Judge, see this comparison in the options: WHAT IS THE BEST OPTION FOR SANDRA? – better option Sandra

Illustrious Judge, the decision of the Palermo Ecopark has no technical basis and places Sandra, who is already old enough, in a process that can affect her health and even her life. When the Ecopark sent a veterinarian to evaluate the Brazilian Sanctuaries, the only question they asked us was if we had enclosures with trees, and we showed them some options. The Florida option has no trees in any enclosure, they are metal domes, tunnels and metal passages to communicate with each other. Already with that contradiction, we can interpret that there are non-technical interests to decide for the most complicated, most delayed and more expensive option. Please do not be fooled by alleged technical reasons that do not exist.

The two Brazilian Sanctuaries, in Sorocaba and Paraná, are places of excellence, among the best ones that exist in the world to host Great Apes. There is no Sanctuary in North America and in the world better than the two Sanctuaries mentioned, I can guarantee that I know some of them. Given the importance of the event, of course, we officially invite you to visit us and check “in loco” the truth of the facts and draw your own conclusions. All on our own sponsorship.

Consider also that the departure of Sandra to Paraná would help in the survival of another lonely Orangutan who lives there, Katai, who came from the Brasília Zoo. The decision for the Sanctuary of Paraná will do an immense good for two beings who have been collecting years of unbearable solitude.

Illustrious Judge Elena Liberatori, please make a good reflection before making a final decision. Besides the economic harms for the Argentine people without need, it puts Sandra’s own life at risk, an orangutan you released four years ago and guaranteed her a dignified life.

We look forward to your wise decision!

Related News
23/09/2019 - Opinion: I love animals but it seems that my country has plenty of money, like it’s one of the richest countries in the world

From PASA – Pan African Sanctuaries Alliance Despite the tremendous challenges of this year, we’re thrilled to share this encouraging [...]

From PASA – Pan African Sanctuaries Alliance No one knows what happened to Pongo’s family, but the area where this [...]

By Jaqueline B. Ramos* Times of pandemic demand a deserved reflection on diverse ethical and moral dilemmas. Among them the [...]