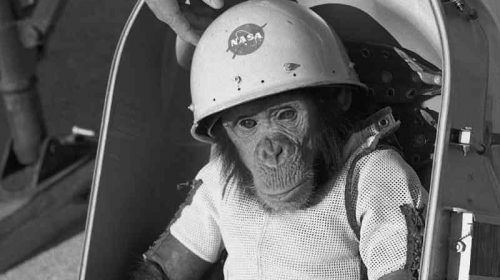 By Tracy Keeling (One Green Planet)

At the end of 2020, a controversial fact emerged about the National Aeronautics and Space Administration (NASA). A Freedom of Information (FoI) request revealed that all the captive monkeys in one of its research centers had been put to death on a single day in 2019. Drug research company LifeSource Biomedical, which leases space at the NASA center, said it received the 27 monkeys “years ago” as an effective donation. The Guardian described the monkey’s living situation, prior to their deaths, as a “joint care arrangement” between NASA and the company.

After the mass euthanization of the monkeys came to light, animal ethics expert at the University of New Mexico, John Gluck, commented that the monkeys were “apparently not considered worthy of a chance at a sanctuary life”. He added, “Disposal instead of the expression of simple decency. Shame on those responsible”.

NASA is, however, no stranger to shame when it comes to the institution’s treatment of non-human animals. It has a long history of using them for experimentation.

No choice for chimps

The purpose of many space-related experiments using non-human animals has been to gauge how living beings react to and cope with the conditions in space, to ease the way for space exploration by humans. Since the early days, primates have been a go-to species for these space rehearsals.

Read the full article at https://www.onegreenplanet.org/animalsandnature/nasas-long-and-controversial-history-with-animal-experimentation/