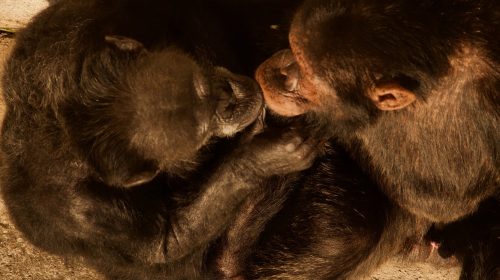 Cecilia, a chimpanzee living in a Brazilian animal refuge since arriving from Argentina in April, now has a new “companion.”

For a week, Cecilia has been sharing her habitat at the refuge with Marcelino, a 10-year-old chimp born at the Sorocaba nature preserve in the interior of Sao Paulo state.

Cecilia, who is 19, and Marcelino are now experiencing their own “honeymoon” at the sanctuary, according to what Cuban veterinarian Pedro Alejandro Ynterian, the owner of the animal refuge, told EFE.

Cecilia was transferred from the zoo in Mendoza, Argentina, suffering from trauma and arrived at the Brazilian sanctuary in April, in accord with the world’s first court ruling in favor of a primate in response to an “unwarranted deprivation of freedom.”

The Argentine chimp went through a period of quarantine, but in recent days she began interacting with Marcelino, after several months of solitude.

“They’ve been together for a week. They’re doing fine. We don’t know if they’ve mated, because they’re discrete. But there hasn’t been any problem between them,” Ynterian said.

Cecilia, who has adapted “perfectly” to her new life in Brazil, began to pay attention to another chimp named Billi, but the male was not interested in her, and so authorities decided to pair her with Marcelino.

“At first, there was a little tumult because Marcelino wanted to mark his territory. We separated them and then we put them together again and the situation is now under control,” said the owner of the sanctuary, which is some half a million square meters (about 123 acres) in size.

At the Sorocaba sanctuary, the chimps live in a type of fortress divided by cement walls into different compartments that the various groups inhabit, EFE learned upon visiting the site.

The idea for the sanctuary arose informally two decades ago and came to fruition in 2000 when Ynterian decided to join the Great Ape Project, which launched a campaign to make the great apes – in danger of extinction – part of the Living Patrimony of Humanity.

Although the chimps are the main animals living at the refuge, on the premises are also other simians, lions, birds, and bears “rescued” by regional authorities from circuses and zoos, as well as from animal trafficking networks.

From PASA – Pan African Sanctuaries Alliance Despite the tremendous challenges of this year, we’re thrilled to share this encouraging [...]

From PASA – Pan African Sanctuaries Alliance No one knows what happened to Pongo’s family, but the area where this [...]

By Jaqueline B. Ramos* Times of pandemic demand a deserved reflection on diverse ethical and moral dilemmas. Among them the [...]