Joanna and Rikita are free at last 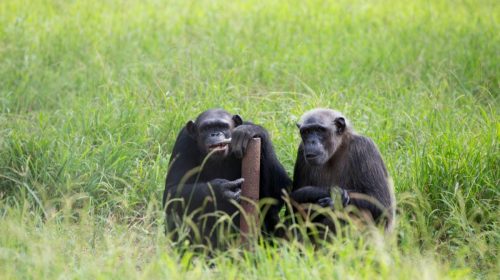 Every day for 12 years, Joanna and Rikita stared out from the bars of their cages at the trees they would never climb and the grass they could never touch. Stolen from their families in the forest, then sold as novelty pets, they only knew a life of cruelty.

Joanna and Rikita were still nursing from their mothers when they were caught by bushmeat poachers and sold into the illegal market for pet chimpanzees in Angola. Once they were too big for their owner to put them in diapers and coddle them, he locked them in separate concrete and steel cages and never let them out again.

When we first learned about Joanna and Rikita over two years ago, I was horrified at the barbaric conditions they lived in. The floors of their cages were packed with garbage and filth and had no drainage. Come rainy season, they were often wading in flooded trash. To make matters worse, their owner struggled to buy them enough food to survive.

Because there’s no sanctuary in Angola to send them to and very few people that could help, it took us years to coordinate Joanna and Rikita’s rescue. PASA and our partners IFAW and Tchimpounga Chimpanzee Rehabilitation Center worked hard to arrange import and export permits, mandatory blood tests, veterinary exams, and transportation to Tchimpounga. At times, I worried that this rescue might never happen. But because of your persistence, because you never gave up on them, Joanna and Rikita are finally free.

When the rescue team arrived to open the cages, they found another surprise: a baby chimp. Tina, just a few years old, was alone in the back of a truck and also desperately needed to be saved.

In one of the biggest days of their lives, Joanna, Rikita, and Tina were all rescued and brought to forever safety at Tchimpounga.

We could only hope this big change wouldn’t overwhelm them. Would they be afraid of open spaces after 12 years of imprisonment? Would they get along with other chimps?

We are happy to share that Joanna, Rikita and baby Tina have all integrated into a family group.

PASA is working to rescue more great apes from unthinkable suffering. We can’t do it without you.