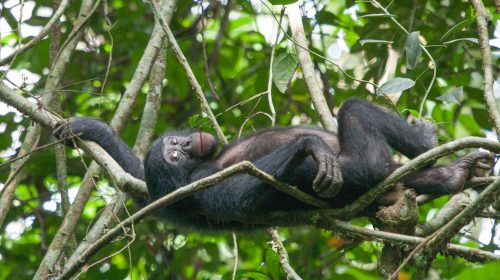 By Jaqueline B. Ramos* / Photos credit: courtesy of SCB/WCBR

Kiku arrived in the group when she was estimated to be 10 years old, on December 1984. She made a special bond with Halu, an older female, considered to be a “specific senior female” (SSF), using the scientific language of field researchers. With the support of Halu, Kiku became a member of the group denominated E1 and now she is its most powerful and influential female.

With her support, her first son, Nobita, had been an alpha male for about 10 years,  until 2018/2019. Then, Kitaro, Kiku’s second son, took his place. Apart from that, DNA analysis revealed that most of the infants in the E1 group are Kiku’s grandchildren – alpha male sire more infants than other males.

According to primate experts of Primate Research Institute (PRI), from Kyoto University, Japan, Kiku is an example of a very successful female bonobo and her story helps to understand how bonobo society works – therefore providing important input to conservation programs of the African ape.

In fact, Kiku is part of one of the wild groups that have been observed and studied by Japanese researchers since the 1970’s in the forests of Wamba area, approximately 1000km from Kinshasa, in The Democratic Republic of the Congo (DRC). Bonobos (Pan paniscus) is a great ape species known to live in groups generally in a more peaceful way, and in which females have a very strategic role in management collaboration and tension regulation. Their habitat is the forests located in the south of Congo river in the DRC.

Unfortunately bonobos are considered to be an endangered species, with their population decreasing in the wild due mainly to habitat loss and poaching for bushmeat and pet trading. These pressures were elevated by the movements of political conflicts and corporations interests (mineral mining activities and deforestation) which arose in the region in the last decades.

After the civil wars that assaulted the country from 1996 to 2003, social and economic disturbance led to an astronomical wildlife hunting pressure. The number of wild bonobos were estimated to be substantially bellow 10,000 individuals by that time. Studies showed that the number of people who ate bonobos, for instance, increased as a consequence of the war. 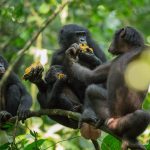 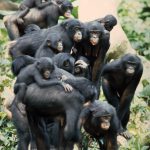 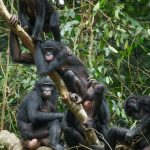 It’s common to observe a lot of females and infants together in a bonobo group, playing, grooming and sharing food

The efforts of Japanese researchers to know more about bonobos and collaborate with their conservation in DRC date back from 1973, when renowned primatologist Takayoshi Kano conducted his pioneering field survey covering a large area of several hundred kilometers on a bicycle. He managed to locate very remote villages with people who were not used to non-Africans.

Eventually he came upon the village of Wamba, where the villagers were more open minded and where he could hear bonobo calls from the forest. These people are called Bongando, in the local language, and are primarily agriculturalists. They are culturally connected to the forest, have expansive knowledge about useful plants and have many folk tales in which animals appear, especially bonobos. “There is a strong belief among the people in Wamba that humans and bonobos were originally brothers in the same family. Traditionally, hunting bonobos has been strictly prohibited. This human-bonobo peaceful coexistence is the reason why bonobo research was established in Wamba in the first place”, explains Professor Takeshi Furuichi, from the Department of Ecology and Social Behavior of PRI and member of the Wamba Committee for Bonobo Research (WCBR). WCBR is a group of researchers mainly on primatology, anthropology and ecology fields who work in and around the Wamba area, among them Congolese counterparts. Since Professor Kano and his assistant, Suehisa Kuroda, were able to habituate** the first group of bonobos in the area in 1974 and started to observe them closely, valuable data on their population dynamics and life history had been collected, contributing substantially to the scientific knowledge about bonobo behavior.

Currently WBCR is observing four groups of bonobos, 140 individuals in total – the successful female Kiku is one of them. Of these, two groups, denominated E1 and PE (around 70 individuals), have daily follows conducted, from morning until they make their night beds.

“Each bonobo is given a name and we can distinguish them by their facial and body characteristics. This methodology has already been proved to be extremely helpful for behavioral studies”, Furuichi points. Habituation and naming each individual in field research is called “Japanese method” and was developed in the years that followed the IIWW. In the beginning it was criticized by Western zoologists as a wrong way of anthropomorphism, but evidence showed its scientific potential value.

In the late 1980’s, the research work on the field in Wamba region were already an international reference and the experts identified the need to establish a protected area for bonobos, due to requests from inside and outside the country.

The first idea was the implementation of a National Park, but Japanese researchers were extremely against it, because it meant that people in the area would have to move out and be banned from the resources of the forest.

“We were already aware that bonobo research and the lives of local people were inseparable linked, and must develop together”, says Furuichi. “When people are threatened, forests and animals are also at risk”.

Instead, it was then decided to establish, in 1990, the Luo Scientific Reserve, an 481km2 area under the Ministry of Scientific Research and Technology of the DRC. Research have been conducted in this area since then, but suffered a huge impact and were discontinued after political disorders started in 1991, followed by two civil wars that lasted until 2003. Bonobo research and the lives of local people are inseparable linked

The activities were fully resumed after the war and by this time the Japanese experts made one more substantial contribution. In 2004 they founded the Support for Conservation of Bonobos (SCB), a non-profit organization to specifically conduct the conservation activities for wild bonobos, assist the livelihoods for local people and promote fund-raising activities for donations to the bonobo sanctuary Lola ya Bonobo, in Kinshasa.

SCB built the only hospital in Wamba village in 2011 and have been supporting medical devices and supplies. The organization also supports the construction of schools, the acquisition of student and teacher supplies, the maintenance and repair of roads and bridges and hire local people as forest guards. It also provides scholarships for secondary school and university students from Wamba and the surrounding area.

“To protect bonobos, it is not enough to tell people facts about how valuable bonobos are. We need to show people that there are benefits with their protection and to act in order to ensure these benefits”, Furuichi concludes.

SCB activities are sponsored by donations and fund-raising. Any monetary donation is greatly appreciated and goes towards the conservation and social programs developed in Luo Reserve and Wamba region. More information on the activities and ways to contribute at https://en.bonobo-wamba.com/