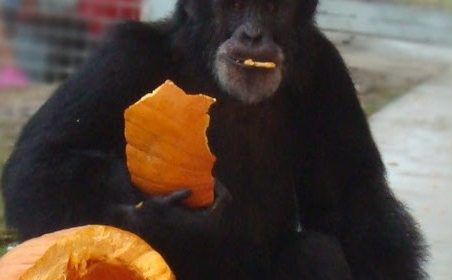 Pumpkin (Save the Chimps)

Perhaps you’ve carved pumpkins, drank your pumpkin lattes, and enjoyed your pumpkin spice. Well, now it’s time to get to know Pumpkin the chimp and learn how you can support him with a symbolic adoption!

Pumpkin was born on October 27, 1986 at the Laboratory for Experimental Medicine and Surgery in Primates (LEMSIP) in New York State. He was not quite two years old when he was taken from his mother. Over the next eight years, he was anesthetized with ketamine approximately 180 times, and endured at least 23 painful liver biopsies. When he was five years old, he started self-mutilating, creating wounds on his abdomen, side, and legs.

In October 1996, just before his tenth birthday, he was sent to the Coulston Foundation, a research laboratory in Alamogordo, New Mexico. The Coulston facility had a poor record of animal care, with several violations of the Animal Welfare Act. Ironically, though, the move to Coulston was actually an improvement. His exposure to testing was limited to a few times a year and he was introduced to a small group of chimpanzees. He also had a chance to go into an outdoor cage for the first time in his life. Nevertheless, he continued to frequently self-mutilate, causing severe wounds. Medications were prescribed in an effort to reduce these behaviors, but his emotional scars were deep.

On September 12, 2002, he was rescued by Save the Chimps and his life in a research lab came to an end forever. Pumpkin is a kind and gentle soul. He loves basketballs and kiddie pools. For years after his rescue, he would not go onto the 3-acre island that he shares with his family, but will now go out onto the platform and relax under the shade of the oak tree with his family.

Pumpkin has stopped self-mutilating and his anxiousness has become infrequent and we think excellent enrichment opportunities, the care of a loving staff, and the companionship of his family have made all the difference. His ability to heal is truly an inspiration.

To learn more about this handsome guy and help support him, adopt him today. You will receive an adoption certificate, bio, photo, and update.