In Memory of Dr. Carole Noon 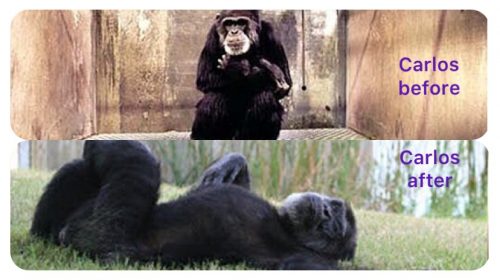 Twelve years ago today, Save the Chimps’ founder, Dr. Carole Noon passed away of pancreatic cancer in her home on sanctuary property. She remains an inspiration to all the lives she touched and a motivator to carry on her important work. More than 300 chimpanzees have found the peaceful and dignified retirement they deserve thanks to the tireless work of Dr. Carole Noon and the founding of Save the Chimps.

Today, we would like to share one of what she called “Carole Noon’s Chimp Diaries.” These letters to staff were always full of wit and charm, as she updated everyone on the latest happenings at the sanctuary.

Last week we opened the doors for the latest group to arrive in Florida. Before the first members of this group left New Mexico we started calling them Sally’s group. We needed a way to refer to them with each other and on the web site. For almost a month Sally’s beautiful face was the first thing you saw when you logged onto www.savethechimps.org. Meanwhile, back in Florida, we still referred to where Sally now lives as the “New island.”

I was overwhelmed with all the changes in the chimps that arrived; the previously socially inept Larry is now just one of the gang, dear Reba, who grew up in the horrors of 300  (the building within the lab notorious for small, dark cages with no windows or outdoor space) listening to Nuri scream each night, was now in Florida and looking so good and when did Geraldine turn from 50 to 20? Nice try, guys, sending two big boys in place of little Luke and Braeden but I am on to you and want those two babies back.

People kept asking me, after Sally and the first group arrived, “What are we going to call their island?” I answered “We don’t know yet as the name will evolve once everybody gets here.” And that is exactly what happens. Sometimes a group can arrive, like Lou’s group or Rufus’s group, and nothing changes and the name is right and that is what we call the island. But don’t forget the custom made climbing platforms on Doug’s island complete with handicap rails. Everything was designed especially with Doug in mind. Doug was all over that island and although he is gone now we still call it Doug’s island and I suspect we always will.

When Ron’s group moved to Florida, over a period of several months, we called that island Ron’s island until ALICE arrived on the scene. You guys remember Alice as the shy and timid one but if you had been on the receiving end of Alice you would appreciate why it is now called Alice’s island. Her new found power all but insisted on the name and we were all too scared of her to suggest otherwise!

Back to Sally’s group. The last six chimps arrived, in spite of the stolen truck, last week. We gave them a day to get reacquainted and then we opened the doors to the island. We don’t just open the doors and let the chimps out all at once – the chimps trickle out in small groups of three or four over a short period of time. Spanky was in the first group – the door was opened and Spanky was the first at the door. He had that confused look many of the chimps have at that moment. It looks something like “Why is this door open, is it a mistake, what do we do now?” Spanky stopped asking questions and climbed out the door. For the first time in his 21 year life there was no ceiling over his head.

Carlos was in the second group we let out. Carlos was born in Africa some 40 years ago and lived alone in 300 before the night lights and skylights, the slide doors or penthouses. I opened the door to the island again and Carlos and two other chimps rushed forward. For a split second, I am talking a fraction of a second, they hesitated and stood looking out the open door. Then Carlos made his move. He politely elbowed the other two chimps to the side as he pushed his way through the door. I think I heard him say something like “Sorry guys, but I have been waiting more than 40 years for this.”

And with that, Carlos left the building. He bolted across the patio, galloped down the land bridge and ran across the island. We opened more doors and all the chimps went out. Some stayed on the patio but many explored the island. At the end of the day a call came across the radio that Carlos was not coming in for dinner. Can you imagine – Carlos is setting the boundaries this time around? Carlos staked his claim and we have stopped asking what to call this island.

I know exactly what steps we all need to take to make these happy endings a reality including the grunt work at each end, the setbacks and the victories. None of what we do is lost on me. It takes a team, a really BIG team spanning two states no less, to pull this off. And it takes chimpanzees with more heart and courage than I can imagine.

I could not be prouder of any of us.

Click here to know more and donate to Save the Chimps