In Loving Memory of Henrietta 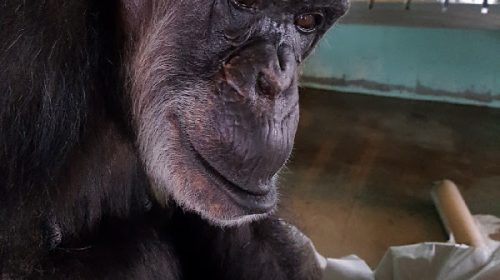 Henrietta (Save the Chimps)

Henrietta, one of our beloved elderly residents, passed away recently due to complications of high blood pressure and heart disease. Henrietta, also known as Henri, was born in the wild in Africa in 1960s, and estimated to be at least 51 years old when she passed away. She was an incredibly special chimpanzee who captured everyone’s heart, chimpanzee and human alike. She was a member of Kiley’s family and known for her small stature, feisty personality, and love of baby doll toys.

When Dr. Noon, our co-founder, entered the Coulston Foundation, a now-defunct research laboratory in New Mexico, Henrietta was one of the first chimps to catch her eye. Living in an area called “the dungeon” due to its lack of windows and rows of isolation cages, Henrietta appeared to Dr. Noon as an elderly female whose transfer to Florida should be prioritized so that she could spend the little time she had left in sanctuary. To our surprise and delight, Henrietta lived another 14 years despite her advanced age. Those years were filled with the comforts of sanctuary – a large island habitat, a group of more than 20 chimpanzees to call her family, fresh food, and a daily variety of stimulating enrichment to keep her mind active.

And enrichment indeed was one of Henrietta’s favorite comforts. A few years ago, one of Henrietta’s caregivers offered her a human-like baby doll. We quickly realized that this was Henrietta’s favorite thing in the world to have. She would carry her baby doll with her everywhere and treat it like her own baby – from carrying it on her back to carefully grooming it. She would keep her baby doll with her every day until it was worn down, and we would offer her a new one. It became extremely rare to see her without one of her baby dolls! She also loved to eat fresh hibiscus branches, flowers and all, so we planted hibiscus trees next to her island to make sure we could offer them to her on a regular basis. Perhaps because she was born in the wild, she loved being outside and eating wild plants – something that not all captive chimps enjoy. When we installed artificial termite mounds on her island that simulate termite mounds in the wild, Henrietta was one of the first chimps in her family group to understand how to use sticks as tools to extract treats. The rest of the group carefully watched wise Henrietta until they understood as well.

But most of all, Henrietta loved the companionship she rarely had before coming to sanctuary. When Henrietta first arrived to the sanctuary in 2004, she became close friends with Rebecca, Casey, and Dana – a deeply close-knit crew that stands out in the memories of our staff. Later in her life, she became best friends with Lupe, a fellow elderly female who was also born in the wild. The pair loved to be out on the island together and could often be found relaxing and grooming. She also had a wonderful connection with Christopher, a quirky male who can sometimes seem stoic. His stoicism didn’t hold up to Henrietta, though – he always melted to butter when she wanted to play with him. She was friendly with everyone in her family, and great friends with males and females of all ages.

Henri was quite feisty with her human caregivers, but underneath her sassy demeanor, she was a sweet friend who could always be counted on to brighten anyone’s day. She loved playing with her caregivers during meal times by showing her elbow or wrist as if she wanted the caregiver to look closely, only to quickly move with a playful expression on her face. These silly tricks were a daily routine for Henrietta!

We are tremendously grateful that Henrietta spent the last 14 years of her precious life in sanctuary, and our only wish is that Dr. Noon, who passed away in 2009, could have known that Henri surprised us all by living such a long and happy life. Every day we miss seeing her carry her baby doll far out on the island to join Lupe for a nap in the sun, but we know her memory and spirit lives on in with all her loved ones in Kiley’s family.

Rest in peace, Henrietta. We will miss you always.

Help Save the Chimps / Donate in her memory – https://salsa4.salsalabs.com/o/50957/p/salsa/donation/common/public/?donate_page_KEY=7995&killorg=True