In chimpanzees, females contribute to the protection of the territory 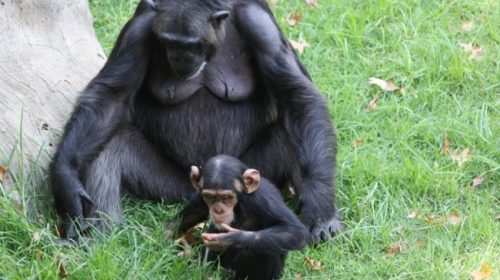 In humans, warfare and territoriality have traditionally been considered male “business.” Chimpanzees, with whom we share this propensity for out-group hostility and territoriality, are thought to follow the same gender difference. This vision may be too simplistic, as suggested by an international team of researchers from the Max Planck Institute for Evolutionary Anthropology in Leipzig, Germany. They extensively studied several neighboring groups of western chimpanzees and their findings reveal that females and even the entire group may play a more important role in between-group competition than previously thought. They found that even though adult males seem important in territory increase, territory maintenance and competitive advantage over neighbors act through the entire group in this population of chimpanzees in the Taï National Park.

In many social species, including humans, even if large group sizes provide competitive advantages over smaller neighboring groups, the preponderant role of adult males in territoriality has often been put forward, most likely biased by an anthropocentric perspective.

In chimpanzees, one of our closest living relatives, and one of the most territorial primate species with humans, males are known to actively engage in inter-group conflicts and territorial behavior, while females stay out of this male business. This pattern seems to be true in some eastern chimpanzee populations. However, past findings in western chimpanzees from the Taï National Park, in Côte d’Ivoire, already suggested that females play a more important part in territorial behavior than previously thought. Thus, chimpanzee competitive ability in territorial contest, in light to variation of social systems, remains unclear.

“To unravel the mechanisms by which group competition and dominance acts in social species, we need long-term data on several groups within a population,” explains Sylvain Lemoine, first author of a new study exploring these mechanisms in western chimpanzees. By compiling more than 20 years of data on four neighboring communities of western chimpanzees from the Taï Chimpanzee Project (TCP), including information on ranging patterns and inter-group encounters, the researchers found that group size better explains the variation in the costs and benefits of between-group competition than the number of adult males.

Although an increase of the number of adult males was associated with territory increase, larger groups — including females, adolescents and juveniles — gain advantage over smaller communities by accessing to larger territories and by suffering from less neighbor pressure. Larger and safer feeding grounds could then confer advantages to the individuals in term of reproductive success.

“The Taï chimpanzees are known to show high levels of gregariousness among males and females, associated with strong social bonds and cooperation between individuals,” says Roman Wittig, one of the senior authors of the study and director of the TCP. In this population, qualified as ‘bisexually-bonded’, males and females of the same community occupy a similar territory, rather than being segregated in their own smaller home-ranges. Both sexes participate to territorial maintenance via border patrols and engage in territorial conflicts with hostile neighbors. Thus, grouping and socializing patterns in this population likely explain why group size, rather than just the number of males, confer their competitive ability in this population.

“Adult males play a role in territory increase, but territorial maintenance, dominance over neighbors and their repulsion also require females and the rest of the group,” adds Sylvain Lemoine. These findings may partly explain the relatively low level of inter-community killings observed in this population, as compared to eastern chimpanzees: when both opponent groups interact with all their members being engaged, the odds of imbalance of power are reduced, as well as the opportunities to kill a neighbor at low-risk.

Catherine Crockford, another senior author of this study, summarizes: “We are now accumulating compelling evidence that cooperation among non-related individuals, and among males and females, has likely been under selection due to the competition between neighboring groups. These findings have therefore strong implications to understand the evolution of cooperation in social species and in humans in particular. Continuous and long-lasting research and conservation efforts are necessary if we want to understand the interplay between competition and cooperation in this emblematic species for human evolution, and how it relates to our own evolution.”