In a first, chimpanzees seen smashing and eating tortoises 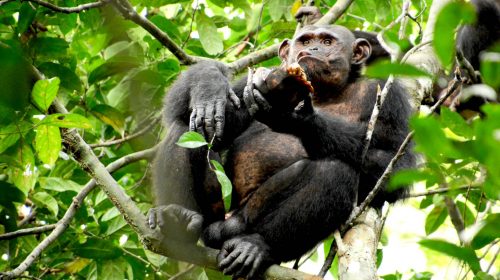 Tortoises’ thick shells protect them from most predators. But our closest relatives have found a way to circumvent this defense: vigorously bashing them against trees.

In a paper published today in the journal Scientific Reports, scientists report seven chimpanzees breaking open forest hinge-back tortoises in Gabon’s Loango National Park. The behavior occurred on multiple occasions over 5,000 hours of observation, and the primates often shared the meat with others in their group.

This is the first time than any chimpanzee has been documented eating any kind of reptile. It’s also unique because the way in which the primates eat these tortoises—slamming them against tree branches and trunks—is a type of “percussive” technology that is akin to tool use, says study coauthor Simone Pika, who studies chimpanzees at Germany’s University of Osnabrück.

It’s already known that chimps engage in other percussive acts, such as smashing open walnuts with stones and breaking apart termite mounds.

But this is a significant addition to their abilities, since “percussive behavior is quite rare,” says Lydia Luncz, a primatologist at Oxford University who wasn’t involved in the paper.

The discovery could also help researchers better understand how chimps evolved to be such accomplished tool users, she says.

For instance, the tortoise-smashing behavior leaves behind physical remains in the form of cracked shells, which can be studied by primate archaeologists like Luncz.

The seven chimps that successfully preyed upon the tortoises were all adult males. That’s likely because cracking open a tortoise requires a certain amount of strength—the animals can weigh more than three pounds, and their shells are very tough. A tortoise’s only real defense is sitting still or burrowing and its strong shell.

In all cases, the apes accessed the meat through the bottom of the carapace, breaking a part technically called the plastron.

Three other chimpanzees—two females and an adolescent male—attempted to break open the tortoises, but failed. In each case, though, one of their colleagues completed the job and shared the meat.

One individual, an adult male named Pandi, seemed to especially enjoy tortoises, accounting for 20 of the 34 successful successful attempts. He was very well habituated to the human researchers, though, so he was easier to observe, which may help account for this fact rather than an incredible knack for tortoise-cracking.

Another individual was seen eating half a tortoise before stashing it in a tree for the night, before scarfing the rest of it the next day. This suggests that the animal was consciously planning for the future, a behavior once thought to be uniquely human that is surprising difficult to study or prove in wild animals. (Related: These chimps have a sophisticated tool-making culture.)

Oddly, the chimps only eat tortoises during the dry season, and it doesn’t seem to be because they can’t find other animals to eat, says study co-author Tobias Deschner, a primatologist with the Max Planck Institute for Evolutionary Anthropology. This may be because tortoises are less active during the rainy season, but that’s only a guess, he says.

Studying chimpanzees is difficult work—the scientists had to contend with elephants and swampy research sites, among other challenges.

“We can’t be in the forest when it’s dark, as the danger of running into an elephant is way too high,” says Deschner, who leads the Loango Chimpanzee Project along with Pika. (The two also happen to be married.)

In general, it takes around five years or more for a population to become habituated to the presence of human researchers. There are only around 10 such wild populations being studied, Luncz says. (Related: 50 years on, chimps studied by Jane Goodall still reveal discoveries.)

“Whenever a new chimpanzee community is habituated and we get new data,” she says, “we always find something new.”

This research reveals that chimpanzee behavior is vast and still barely known, she adds.

A paper published in Science in March suggests that different groups of chimpanzees often have unique traits like behaviors, and if these populations disappear, these aspects of chimp “culture” will be lost forever. That’s important for its own sake, but also because of the similarities between chimpanzees and humans.

Chimpanzees are classified as endangered by the International Union for the Conservation of Nature. Western chimpanzees, one of four chimp subspecies and the most prolific tool users, are critically endangered (though this study followed central chimpanzees).

“We are closing the door on discovering our own evolutionary history by driving to extinction these animals, whose behavior we don’t even know yet,” she says.