Humans can tell what chimps are saying… sort of 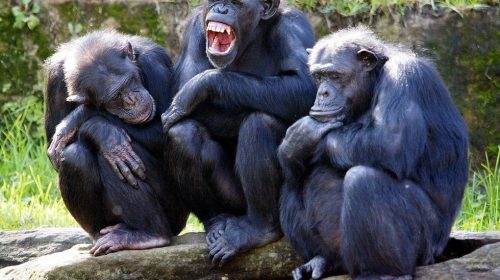 Researchers in the Netherlands found that humans were able to differentiate chimp cries depending on their context -- be that being tickled, threatened by a predator, or eating high-value food items ROB ELLIOTT AFP/File

Do you speak chimp? They are among our closest relatives in the animal kingdom, and new research published Wednesday shows that humans can tell when a chimpanzee is happy, sad, angry or scared — simply by listening to their cries.

Proving a hypothesis first posed by Charles Darwin, researchers in the Netherlands found that humans were able to differentiate chimp cries depending on their context — be that being tickled, threatened by a predator, or eating high-value food.

“We demonstrate for the first time that humans can accurately map other species vocalisations to specific behavioural contexts,” Roza Kamiloglu, a researcher at the University of Amsterdam and lead study author, told AFP.

Kamiloglu and the team asked close to 3,500 participants to listen to recordings of 150 chimp sounds, then decide based on what they heard if the animal was in a positive or negative situation, and whether it was excited or relaxed.

Around 300 participants were then asked to match sounds to a list of 10 behaviours, including chimps mating, being separated from their mothers, or being scared by something.

The humans proved surprising adept at understanding the correct context in which the cries were recorded.

They were more successful in identifying situations designated as “negative” — such as when the animal is in danger or under stress — something Kamiloglu suggested could be down to our inbuilt survival mechanisms.

“Survival might be facilitated by the ability to infer information from negative vocalisations of other species because negative situations involve danger and they might be more important for survival,” she said.

Darwin theorised in the nineteenth century that vocalisations like laughter and screams were linked to emotional states shared among similar species.

Kamiloglu said the study, which was published in the journal Proceedings of the Royal Society B, supports Darwin’s idea.