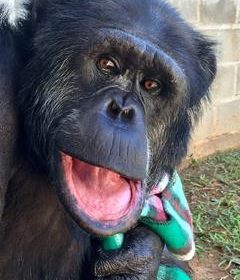 I did not think I would ever write these lines. Guga was my eighth child. All of the ones before him, human primates; he was nonhuman, but for me it was no different, perhaps because of his fragility, the dangers he lived daily, in a brutal and unjust society of humans, he needed more protection and care.

Two months ago, he almost crawled to the vet Juliana Kihara and surrendered to a disease he did not understand and that destroyed him inside. Possibly a pancreas tumor undermined his defenses and his strength, but he was a fighter, was born in a zoo, was sold illegally after a few days of his birth and pulled out of his mother. He met us, we had never lived with a chimp. We had a Conservationist Center in Sorocaba with small primates and birds.

We went to pick him up in Curitiba and, on an amazing trip through road BR116, we brought him to our house. We lived in an apartment, but we were already designing our move to a house, in a Condominium in the city of Itu, nearby Sorocaba. We hired a nanny to take care of him during the day, Vânia and I had two teenagers who also needed care.

Guga was three months old when we caught him. We had no idea what it was like to raise a nonhuman primate, which quickly made us cross this false barrier of Primatology and he became one of us.

Our initial idea was that Guga would live with us in the house of the Condominium in Itu, which was unbearable. We quickly realized that there he was a stranger in the nest with a lot of danger around him. That day we decided to take him to Sorocaba. Thus was born the Great Apes Sanctuary, which now houses 50 chimpanzees and more than 200 other beings of other species, being a world reference in the care of chimpanzees.

When warned of the disease, I went to meet him, he came almost crawling and put his head in my lap, as he did when he was a baby and did not want me to leave, and left him alone. I got aware that Guga could be dying, something I never imagined. That strong, active being, who was almost human in his attitudes and presence, being fatally struck by a banal and absurd disease. Glucose bordered on the 800, a human would have already died.

When he arrived at the Sanctuary, his mother was already mortally wounded, a cancer, possibly metastasized from a deeper one, developed in her mouth and in a few weeks, horribly, took her life. Maybe Guga carried that terrible genetics on his body.

Thus began the struggle against the silent enemy, who, from the deep interior of his powerful body, undermined and destroyed him. He was an exemplary patient, he trusted us, the veterinarians, the caretakers. We isolated him and set him up for a permanent treatment, but he was losing his strength, his infections were in parts of his body, he fought as he could, he helped us, he took all the medications, he underwent the tests, he allowed blood to be drawn and all procedures required.

Days ago, they called me, he could not move his left leg, it was the beginning of the end; he was no longer moving, he crawled, the tears dried on our eyes and kept spouting in our minds. It was a Nightmare I never imagined having to go through. He fought in every possible way. We anesthetized him, and did the research of his body through imaging tests. Dr. Walton Nosé and his assistants came from São Paulo to examine his right eye, which had a dilated pupil. The disease had not yet affected his retina and he did not need a more specific treatment. We also noticed that blood began to flow out of his gut, he wiped himself with a cloth and we began to stay with him for 24 hours to help him as much as possible. A lot of his blood was lost without us being able to do anything. One of his testicles had already burst and we were able to stop the infection.

Last Sunday, amidst the country’s turbulence, when we were even isolated for lack of fuel, Guga squeezed my hand when I was sleeping next to him, and abandoned this world, which neither he nor we understand.

GUGA was the founder of the Great Apes Sanctuary of Sorocaba. Everyone knew he was fighting death. The unusual move for a Sunday warned his comrades that the leader’s struggle had come to an end. A silence fell upon his brothers, whom he helped to save from certain death at the hands of human deity.

REST in PEACE, Great GUGA. We will never forget you!

Recent pictures of Guga chimpanzee at the Great Apes Sanctuary of Sorocaba – SP: 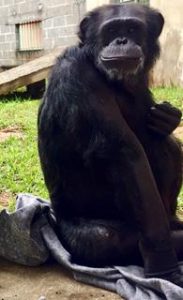 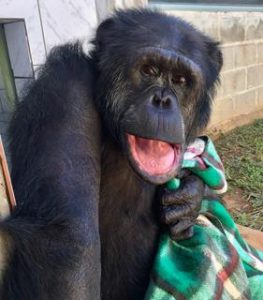 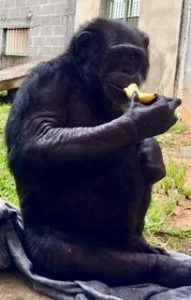