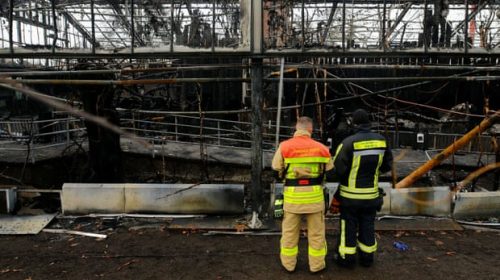 Firefighters at the scene of the blaze, which killed more than 30 animals. Photograph: Thilo Schmülgen/Reuters

Dozens of animals including gorillas, orangutans and chimpanzees were killed at a zoo in the western German city of Krefeld after a fire ripped through the monkey sanctuary in the early hours of the new year.

The fire was likely to have been caused by Chinese sky lanterns that were set off amid New Year’s Eve celebrations and landed inside the zoo, police said on Wednesday afternoon.

Local residents raised the alarm at 0.38am local time (2338 GMT) on Wednesday morning. When fire services arrived at the zoo shortly after, they found the tropical monkey sanctuary engulfed in a fire that could not be contained before the building had burned down to its skeletal structure.

“Our worst fears have become reality,” the zoo’s management said in a message posted on Facebook. “There are no surviving animals in the monkey house.”

Opened in 1975, the 2,000 sq-metre enclosure housed 10 great apes as well as numerous smaller monkeys, tropical birds and fruit bats. German media reported on Wednesday morning that more than 30 animals had been killed.

A nearby open-air gorilla enclosure had remained untouched by the fire, the zoo said. A silverback male popular with visitors, Kidogo, and his family were alive and well.

Two chimpanzees, female Bally and male Limbo, were also discovered to have survived the fire, in what the zoo’s director, Wolfgang Dreßen, described as a “miracle”.

However, German media reported that 48-year-old Massa, the oldest living silverback gorilla in the European endangered species breeding programme, had perished in the flames.

Investigators believe it is highly likely the fire was was caused by Chinese sky lanterns, also known as Kongming lanterns, which had been illegally set off in the city, police said at a press conference on Wednesday.

Several witnesses had reported low-flying lanterns in the city on Tuesday night, and three lanterns with handwritten messages had been found near the zoo enclosure, a police spokesperson said.

Setting off rockets and firecrackers in the streets is a key part of Germany’s New Year’s Eve ritual, and the law allows citizens to light their own fireworks in public on 31 December and 1 January.

In recent years there has been a growing debate about a ban on pyrotechnics, and about 30 German municipalities imposed partial bans on private fireworks this year.

The sale of Chinese sky lanterns is already illegal in all German states bar the eastern state of Mecklenburg-Vorpommern, however.

The Krefeld zoo’s management said several employees were still in shock and the site would remain closed to the public on 1 January.

German zoo fire: three women hand themselves in to police