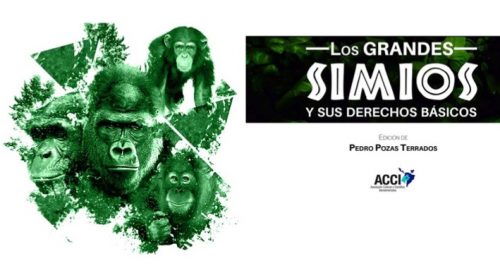 At the end of 2018, the Great Ape Project Spain decided to write a book that would serve as the basis for the struggle for the basic rights of great apes as a celebration of our 20th anniversary in 2019. Yes, we have completed two decades of struggle for our evolutionary brothers, two decades in which many important things have happened, in which numerous scientific data and reports that support our struggle have been discovered.

That is why we wanted to involve people recognized in the various fields of science, culture, the environmentalist and animal movement to write their opinions in support of the basic rights of the great apes, which, as you know, is the main objective of our Organization. I contacted several people who, without hesitation, wanted to participate in this beautiful literary project that also serves as a scientific basis and support for the manifests that during these decades we have struggled permanently to achieve. Without the specialists who participate in this book, the goal could not have been achieved. So from now we give our most sincere thanks for accepting this challenge that has been met before the end of the year.

The benefits obtained from the sale of this book will be entirely for a project in Mali that will be led by Itai Roffman Yonathan, a scientist, anthropologist at the Department of Sociology and Anthropology of Yezreel Valley College (Israel). This Project, which I call NATIVE NATIONAL PARK, consists of talking with the tribal chiefs of the neighboring towns of Mali and signing a collaboration agreement for the protection of the chimpanzee, the jungle and all its inhabitants throughout their territory. It has already achieved a native protection of the jungle of about 700 square kilometers and we will continue to expand and be an example to extend this practice to the rest of the neighboring countries, as an action that comes from the people themselves in the fight against climate change.

We have 250 books that we will sell at 20 euros, almost at cost. It can also be ordered in Amazon or in the Casa del Libro –  price is 28.50 euros. The book consists of 568 pages and its photographs are in color, containing a central booklet of numerous color photos of the inhabitants of what I call “The city of chimpanzees”, a sanctuary located in São Paulo (Brazil) that is managed and owned by the General Secretary of the Great Ape Project International. At the end of it, in the chapter Manifests, there is  a draft of the Law of Great Apes, the manifesto for the great apes to be declared non-human persons and another for UNESCO to declare them a World Heritage; and a final manifesto written by scientists so that chimpanzees and bonobos, who today belong to the genus Pan, become our own genus, Homo, for genetic reasons.

With the books we have, our intention is to make presentations for sale and presentation of the Mali Project in various places. If any entity or person is interested in presenting the book in a certain place, please contact the coordinator of the book,Pedro Pozas, at the address direccionpgransimio@gmail.com. We can provide them to those who live in Madrid or Alicante.

We hope this book will serve as a tool to continue our struggle for the basic rights of great apes.

It can also be purchased at: