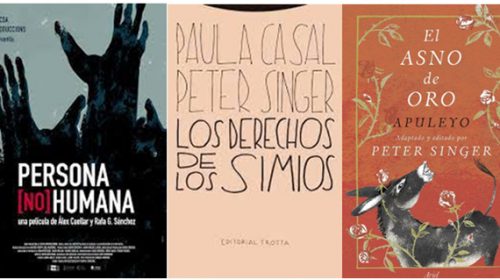 Peter Singer, philosopher, great advocate of animal rights and author of two books that have become essential for the movement – Animal Liberation (1975) and, together with Paola Cavalieri, The Great Ape Project (1998), arrives in Spain to support the creation of the Great Apes Law. The General Direction for Animal Rights will start work on this proposal after the summer, so that the law is included in the legislative program of the Ministry of Social Affairs and in the 2030 Agenda.

Singer will also present the new book Los Derechos de Los Símios, written in partnership with Paula Casal. It’s been nearly 30 years since The Great Ape Project was published. There have been many scientific discoveries about great apes, which have even more capabilities than those described in 1998. Much has also changed from a legal point of view, with new laws and more Habeas Corpus cases and judges accepting the idea that an ape could be a legal person. And also, unfortunately, things have changed a lot in relation to extinction and the situation is now much more serious, mainly due to the coronavirus.

The event “Human and animal rights. Two days with Peter Singer” will be held on June 9 and 10, 2022, at Pompeu Fabra University (Barcelona), in the Poblenou campus auditorium, with the participation of numerous academics from different countries.

On the first day (June 9), there will be a preview of the documentary Persona [no] humana, presented by Alex Cuellar, director together with Rafa G. Sánchez. The film follows the Habeas Corpus processes of the orangutan Sandra, who is now at the Center for Great Apes Sanctuary, in the United States, and the chimpanzee Cecilia, who is now at the Great Apes Sanctuary of Sorocaba, in São Paulo, Brazil.

Check the program of the event: