GAP Spain condemns the fire that occurred in the Krefeld Zoo, Germany, where eight great apes have died 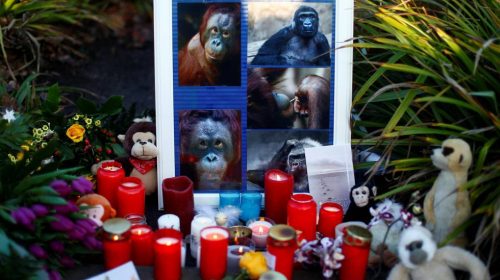 2020 begins with a new tragedy at the Krefeld Zoo, located west of Germany, caused by a Chinese flying lantern that fell on precarious facilities and with lacking of security. In Spain almost exactly a year ago at dawn on January 6, 2018, the three giraffes of the Cabárceno Zoo (Cantabria) died after a short circuit inside the house where they were locked up without the possibility of fleeing.

Great Ape Project of Germany informed us that the tragedy could have been avoided. The enclosure where the burned and asphyxiated animals were found was in poor condition. Its construction dates from 1975 and the negligence fire burned to the ground. There was no guard or caretaker who had asked for help in time (the neighbors were the first to report the fire and when the firemen arrived it was too late for them to interfere). No alarm system was installed in the building. There was also no spray system for firefighting or  outdoor enclosures in which animals could have been saved. They were trapped in their little sleeping cages.

Five orangutans of Borneo (Suria, Lea, Sungai, Changi and Bunjo), two Western lowland gorillas (Massa, the longest of those in captivity in Europe, and Boma) and the chimpanzee Charly have died. Several monkeys, fruit bats and exotic birds also died. More than thirty animals. In addition, two chimpanzees were injured and the firefighters did not explain how they found them alive.

Now the Zoo again plans to rebuild the burned facilities as soon as possible through fire insurance and donation of money and acquire new breeding groups for orangutans and chimpanzees.

For Great Ape Project, zoos should be converted and simply be rescue centers for native animals, taking exotic animals to sanctuaries. Great apes must be taken from them. Numerous scientific reports already support that they should not be locked in captivity because they belong to our own family Hominidae and even ask that the chimpanzee and bonobo should part of our own homo genus. Similarly, for this Organization, all animals in a zoo are mere lifeless cards. They have taken away the essence of living, the culture of their own species and they are only kept in the facilities with a clear economic benefit under the false belief that they are kept that way for the survival of the species. When the zoo is closed to the public, all animals, including great apes, are locked in their bedroom cages taken from outer space.

“GAP Project requests a new legislation on zoos in Spain, with a tougher regulation than the existing one since it is dealing with living beings who feel and that we have forced them to pose for the amusement of children with their parents, in a clear sign of distorting true education. We also strongly request that inspections be carried out in all zoos where protocols are recorded for accidents or natural disasters that due to climate change will be increasingly frequent (floods, fires, hurricane winds, etc.). We also ask that in all the cages where the animals are locked have fire fighting devices with water spray systems, to avoid cases such as that of Germany or Cabárceno in Cantabria. The same security that prevails in humans must also extend to nonhumans”, said said Pedro Pozas Terrados, Executive Director of the GAP in Spain.

For Pozas, the zoos of today must not exist and in return they must be converted into non-visitable rescue centers. Today we have many virtual ways to show our children how animals are, so they do not see them in captivity, but in their habitat and in freedom. The protection of the species must be carried out “in situ” where free populations survive in the face of human harassment.

Natasha is an adult female chimpanzee at Ngamba Island Chimpanzee Sanctuary. She is also known as the most intelligent chimpanzee [...]

Peter, Tata and their two sons Miguel and Milan form one of the chimpanzee families that live in the Great [...]

Although they have no way of identifying their biological fathers, male chimpanzees form intimate bonds with them, a finding that [...]

From PASA – Pan African Sanctuaries Alliance Lucie was a tiny one-month-old chimpanzee clinging to her mom in the Congolese [...]

By Kendra Pierre-Louis (The New York Times) Last year was the warmest year on record for the world’s oceans, part [...]