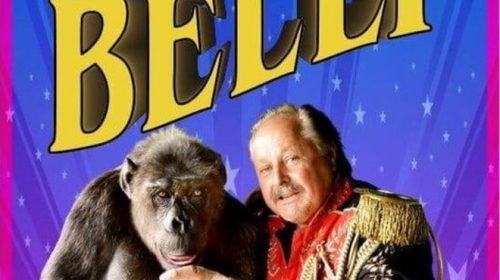 Early this month, international press gave the news about German Court final decision in favor of Klaus Köhler, from Circus Belly, to keep chimpanzee Robby, other than transferring the estimated 43-year-old chimpanzee to better conditions of captivity.

Robby is the last chimpanzee in a circus in Germany and for the last seven years not only GAP, but other apes experts, among them renowned primatologist Jan Goodall, spoke out and tried their best to transfer him to a reserve in Spain. This is the way Robby has been being exploited for the majority of his life – https://www.youtube.com/watch?v=VR-w04l2-1U. It’s extremely sad…

“We are quite familiar with Robby’s case since 2011. He is the last chimp being owned by and carried around in a circus in Germany. He was born 1971 in a small zoo close to the French border and was sold at the age of three to a circus in northern Germany. He was abused for decades to perform in a clown’s costume, in the circus arena. His home is a mobile circus cage, measuring about 10sqm; additionally he has a 30sqm fenced outdoor enclosure, once the circus has arrived at its current place of performance. We tried our best for seven years now to get him out and transfer him to Stichting AAP’s primadomus reserve in Spain – even Jane Goodall spoke out in Robby’s case -, but his owner, circus director Klaus Köhler, managed to get the extraordinary license he holds to keep and display Robby extended year after year, by the vet office in charge. Finally, in 2015 we got a court order to have Robby seized and transferred to AAP, but again Mr. Köhler managed to trickily outsmart the appellation in court, so he could keep Robby. Now, Nov 8th 2018, a final court decision was issued which cannot be appealed anymore: Robby was sentenced to stay with the circus for the rest of his life. Nothing more we can do for him.”

We deeply hope Robby’s case can be used as a motivation for the ban of chimpanzees and animals in general in circuses. For people to boycott even more circuses that exploit animals and for this old fashioned mispractice to be extinguished once for all . But mainly, we hope that Robby finds peace somehow to confront the coward conditions to which he is submitted to.