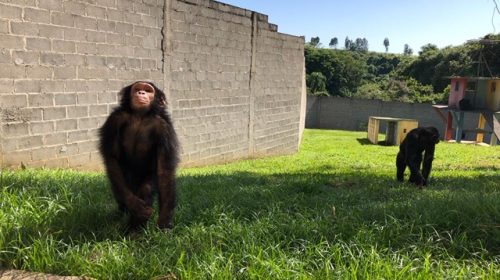 Peter, Tata and their two sons Miguel and Milan form one of the chimpanzee families that live in the Great Apes Sanctuary of Sorocaba.

Milan is the youngest, he is 4 years old, and does the pranks that any child his age, human or chimpanzee, does. Likewise, his mother, Tata, always protects him.

On Sunday, January 26, they were served frozen fruits. Tata took hers and Milan went after her, “stole” two and fled to the tree, climbing it.

Tata goes towards the tree because she didn’t want him to go up, she wanted Milan to go with her to the house and platform, where Peter and Miguel were.

Then she calls him, she even “cries” a little, because she was asking him to come down.

Stubborn as any child, he ate all the frozen fruits before going down. Perhaps he was also afraid of his mother’s “scolding” for mischief, and the “punishment” of not being able to have it.

After a while he finally climbs down, gets on his mother’s lap and they finally go together to the house and platform.

Moments of chimpanzee families like that always surprise us due to their humanity, intelligence and sensitivity, and their similarity to us. It is an inspiration for the continuity of our work to fight for and protect their basic rights.

Watch the video at https://www.youtube.com/watch?v=X-STxG_nGCI