GAP Brazil: News from Cecilia, the first chimpanzee released by Habeas Corpus right in the world 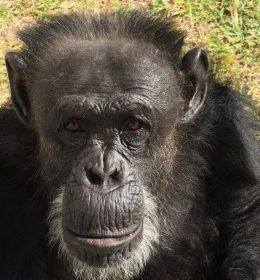 Female chimpanzee Cecília arrived in April of 2017 in the Great Apes Sanctuary of Sorocaba, in São Paulo, affiliated to Project GAP, and made history. She was the first chimpanzee in the world to be released due to her Habeas Corpus right, when the Justice of Argentina allowed her to be transfered from the zoo of Mendoza to the Brazilian sanctuary.

Cecilia’s adaptation was very good and a few months after her arrival she began to live with a companion, male chimpanzee Marcellino.

According to the staff of the sanctuary that accompanies Cecilia, she is in very good health and totally adapted to life in the sanctuary.

See more details of her adaptation in these almost two years since her arrival:

“She feeds very well and enjoys various types of fruits and leaves. She continues to live with his companion Marcellino, who loves her very much and is always around. On some occasions when they had to be separated momentarily, they were both worried about each other and Marcellino even vocalized to call her. Cecilia has a good relationship with her caretaker, but prefers interacting with other chimpanzees, very different to the moment she arrived, when she was very afraid of other chimps. Cecilia likes to interact with Luke, an adult male who is her neighbor, and does everything to get his attention. Another neighbor Cecilia interacts with is Martin. She recently became very interested in him and they spent several hours interacting through the window. Another positive point is that Cecília presents several natural behaviors of the species that have evolved a lot since she arrived, because at first she was very apathetic and did not even vocalize like the other chimpanzees.” 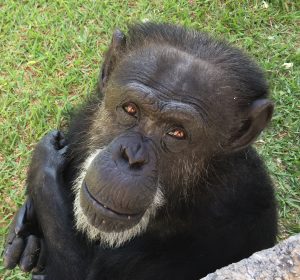 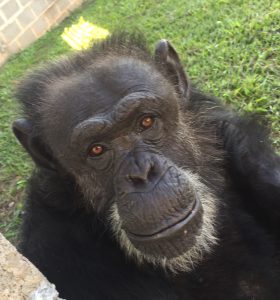