GAP Brazil: Chimpanzee Black is transferred to the Great Apes Sanctuary of Sorocaba 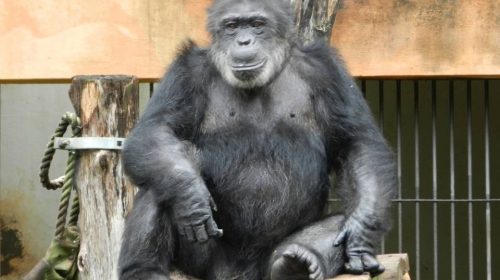 After 15 years of struggle and a lot of negotiations, male chimpanzee Black, aged approximately 50 years old, was finally transferred from the zoo “Quinzinho de Barros”, in Sorocaba, São Paulo state (SP), Brazil, to the Great Apes Sanctuary in the same city, a space affiliated to the GAP Project .

Black’s move was scheduled for Monday, the 6th, and the plan set up by the zoo and the sanctuary teams had the prerogative not to use sedation to avoid risk. The operation began at 8am and around 1pm Black got into the transport box and made the 23km journey to his new home.

Now Black will go through a quarantine period, procedure for every new resident who arrives at the sanctuary, and then the priority will be to integrate him with other chimpanzees.

Black worked in a circus when he was young and about 40 years ago was moved to live at the zoo. A good part of this time he shared his enclosure with female chimp Rita, who died in 2011, and since then lives alone.

Life at the sanctuary is not entirely unheard of for Black. In 2004, he and Rita spent a few months at the site while their enclosure was being renovated at the zoo. At the time there was an attempt to keep the animals in the sanctuary, but without success.

In 2014, with Black already living alone, the GAP and other NGOs campaigned for their definitive transfer to the sanctuary, which was also supported by the GRASP/UN. However, once again, the City Hall appealed and managed to keep him at the zoo.

The NGOs appealed the decision in the lower court, which denied Black’s move. Finally, last April, the SP Court ordered the transfer, based on the arguments that his quality of life in the sanctuary would be much better, living in larger rooms, without the stress caused by the exhibition to the public and having a chance to interact and enjoy the company of other chimpanzees.