GAP Brazil: Chimpanzee Black has a mate in the Great Apes Sanctuary of Sorocaba/SP 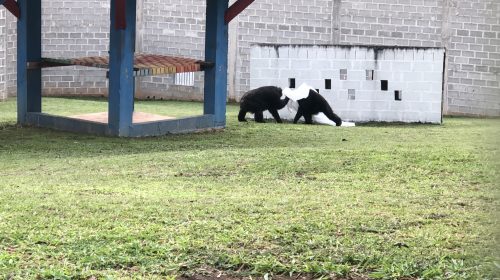 Four months after the transfer from the city zoo to the Great Apes Sanctuary of Sorocaba/SP, affiliated to GAP Project, chimpanzee Black could not have been better. He is fully adapted to the sanctuary routine and has no health problems, despite his estimated 50 years and the fact that he arrived overweighted and with some broken teeth. But today’s great news is that Black is no longer living alone. After a period of rapprochement and integration, he is sharing his enclosure with the 23-year-old female Dolores. In addition to enjoying the company of another chimpanzee after living so many years alone, since then he has been proving more active, which will do very well for his health.

Dolores lives in the sanctuary since 2005 and was rescued from a circus. Despite having a more agitated temperament, probably due to the traumas experienced in the arena, she is used to living with other chimpanzees and has a lot of patience with Black. The interaction has been very positive and healthy for both of them and Black shows to be very happy with the new partner. Black was transferred to the sanctuary in the beginning of May this year. In 2018, the NGOs Agência de Notícias de Direitos Animais (ANDA) and Associação Sempre pelos Animais de São Roque filed a lawsuit demanding the transfer of Black and a judicial battle was fought. The NGOs appealed the decision in the lower court, which denied Black’s move. Finally, last April, the SP Court ordered the transfer, based on the arguments that his quality of life in the sanctuary would be much better, living in larger rooms, without the stress caused by the exhibition to the public and having a chance to interact and enjoy the company of other chimpanzees.

Black worked in a circus when he was young and about 40 years ago was moved to live at the zoo. A good part of this time he shared his enclosure with female chimp Rita, who died in 2011, and since then was living alone.

Life at the sanctuary is not entirely unheard of for Black. In 2004, he and Rita spent a few months at the site while their enclosure was being renovated at the zoo. At the time there was an attempt to keep the animals in the sanctuary, but without success.

In 2014, with Black already living alone, the GAP and other NGOs campaigned for their definitive transfer to the sanctuary, which was also supported by the GRASP/UN. However, once again, the City Hall appealed and managed to keep him at the zoo.