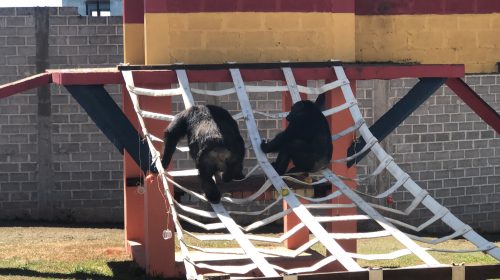 Chimpanzee Black completed, at the beginning of May, a year in his new home – and life – at the Great Apes Sanctuary of Sorocaba/SP. Meeting the main objective of providing greater welfare in captivity, he is fully adapted, in good health, he lives very well with the female Dolores and, mainly, according to the sanctuary staff, he is much relaxed than when he arrived.

Black was transferred from the city zoo of Sorocaba after a long lawsuit that prompted the SP Court of Justice to decree his relocation.

Black is estimated to be 50 years old and is known to have lived for more than 40 years at the zoo – the last few years alone, after the death of his partner, Rita. After the quarantine period after his transfer, the sanctuary team evaluated that Black could already have his first experiences of integration with other chimpanzees.

The first try was with the female chimpanzee Margarete, with whom he had already lived in a brief period when he stayed in the sanctuary in 2004, during a renovation in his enclosure in the zoo. Margarete was already part of another group and did not accept the relationship with Black so well. The team then realized that Dolores, 23, could be a better candidate to share the room with Black and since September last year the two have lived together and are fully integrated.

Check out some recent images and videos of Black and Dolores: