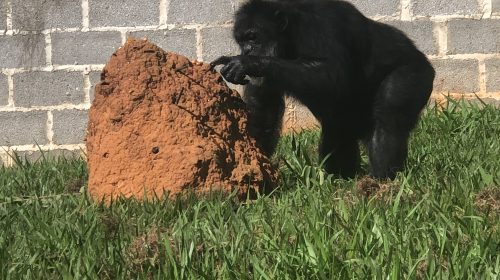 Do not worry. It’s not fake news. Chimpanzees, like all living humans, have a way of expressing their feelings and desires. Chimpanzees get very close to humans in communicating their emotions and state of mind. We have been spending time with them for the last 20 years and can attest this ability. Communication in chimpanzees happens by gestures, facial expressions, attitudes and several kinds of sounds. Millions of years ago, we also communicated like this, but we have evolved to develop our spoken and written language.

In the controversy surrounding Black, unleashed by humans, one never stopped to wonder why not ask himself, what would be his fate preference. But it did not take long to Black, in his own form of expression, to affirm what he DID NOT DESIRE. And it was staying at the zoo. How did this happen? Very simple: A week after his transfer to the Sanctuary, a delegation from the Zoo visited him, as it was previously arranged, to evaluate how he was. When Black saw the zoo people, he was really angry, he thought that they would take him from the Sanctuary and return him to the Zoo. Since he did not know what was happening, he started asking for help not to be taken away from there. At this point Black spoke to all who sincerely wish the best for him that his decision is to stay in the Sanctuary, accompanied by his equals and not as a display piece for humans in a zoo.

It’s not the first time that this happens. In the past, some former chimpanzees owners visited them at the Sanctuary. Initially we made no obstacles, until we realized that the reaction was very negative. They were angry and rejected the visit, and we stopped accepting them. Chimpanzees do not understand why they are there, but they know how to compare their miserable past life with their present life without exposure to the public and see in the past, represented by those who were their owners, a return to an unwanted life.

Usually a chimpanzee can hardly enter a transport box if he is not anesthetized. As the Zoo insisted on not using anesthesia for the transfer, we relied on Black’s intelligence and memory to make the decision. The box was placed in the presence of our technical staff. There was one person he must have known from the time he spent in the Sanctuary while his enclosure was renovated in 2004. He remembered the box he was in and the box he returned to the Zoo. He saw in that situation a clear sign that if he entered that box he would return to the place where his equals were. He thought for two hours and entered, quietly, without reacting aggressively when the box was closed, and during the whole trip he remained in silence. He knew where he was going. The yelling of the Sanctuary’s chimpanzees heard as he entered the gate of the Castelo Branco Highway confirmed that he had made the right decision.

Black lived most of his life in a narrow enclosure, where the public could see him from above and disturb him 10 hours a day. The other 14 hours he passed in a tiny enclosed cubicle of less than 20 square meters, along with the remains of the food of that night. Any intelligent being put into this situation goes crazy.

Those who defend his stay in the Zoo, we challenge them to spend a week in that enclosure, under the conditions that Black lived. Never again will they keep chimpanzees at any zoo.

Black’s routine in our Sanctuary, as of the other 50 like him, is very different. We are one of the few Sanctuaries in the world where chimpanzees are totally free within the territory of their enclosure; they have 24 hour access to the dormitory, the dining room and the outside. They choose whether to sleep in or out. Outside there are tall houses with baskets and platforms. This freedom does not exist in any Zoo in Brazil or in the world that I know of. Chimps of most zoos spend 14 hours a day locked in small cubicles, along with the rodents that surrounded their enclosures and their food.

Another of the fallacies commented on in recent days is about the vegetation. Why do not you have trees in Black’s enclosure? First of all, he is in quarantine until he proves that he can not transmit any disease to his new friends, and secondly, chimpanzees do not live in trees. In the African bush, they make their nests in the trees to defend themselves against predators and make a different nest each night. During the day they move on the ground. There are areas in Africa where there are natural caves, in which they prefer to live at night.

We have some enclosures with trees that were there when we built them. Only infants and toddlers come up from time to time in the trees to play, but adults do not have this habit.

Chimpanzees have all the amenities they need, have beds if they wish to sleep in them, or blankets to make their nests on the floor of buildings. Some sleep in the aerial baskets built on the roof of the houses. This happens especially with those who suffer from claustrophobia, acquired in circuses and zoos, and refuse to enter some place that has a door that can be closed.

In the end of a lot of discussion, we are the first to recognize that the dilemma is not Zoological versus Sanctuary, but rather Slavery versus Freedom.  Sanctuaries exist to give a better and more decent life to thousands of great apes who in circuses, zoos, laboratories of medical experiments and private captives have spent a large part of their miserable lives.

The human race, which developed technology and improved the living conditions of their equals, can not consider that circuses with animals and zoos are something of the highlights made in the civilizing process. Imprisoning animals with walls and jails to display them without thinking of the suffering inflicted on these innocent beings is a proof of a senseless cruelty that is about to be vanished.

Black has already spoken for all those who do not want to be EXPLORED anymore. Human justice listened to him and freed him!