First Habeas Corpus in the United States to free chimpanzees 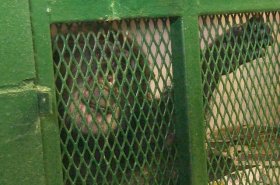 December 3, 2013 will be a historic day in the struggle for the rights of great apes and many other innocent beings exploited and slaughtered by men.  Dr. Steven Wise, founder of NGO NHRP (Nonhuman Rights Project) in 2007, along with dozens of other lawyers , filed an application for a habeas corpus in the Supreme Court of New York , requesting the release of a chimpanzee and his transference to a sanctuary . His name is Tommy and he lives alone in a cage in the town of Gloversville.

Steven Wise presented this heroic action, which sustains humans, in 60 well founded pages with the support of several scientists and scholars who works with the subject . Steven Wise wrote extensively about the great apes and their need to be recognized as legal persons and not as objects, as they are treated today in most laws .

Three other chimpanzees , who are in other locations in the United States , will also have demands for their release in the coming days. Two of them are in Stony Brook University, lent by Center for Biomedical “Tortures” New Iberia , for mobility tests . The fourth chimpanzee, who also lives isolated in a cage, called Kiko, is in a private residence in the town of Niagara Fall.

NHRP Organization, founded by Wise – who was one of those who signed in favor of the formation of GAP in 1994 , when Peter Singer launched the idea -, also announced that it will continue calling for Habeas Corpus of great apes, dolphins and other animals, which are prisoners, without having committed any crime, in zoos , universities, biomedical centers , circuses and private properties.

When GAP Project was established, there was this idea to enter the North American courts to ensure the basic rights of great apes. However, it was found that there was not, at the time, a legal and ethical awareness to the proposal be succeeded. Steven Wise has been working tirelessly all these years, accumulating information and legal opinions, and believes that now is the time to start the battle in the courts to ensure legal personality for these beings.

A group of Brazilian lawyers and prosecutors, led by Prof. Dr. Heron José Santana, filed, in the last decade, a Habeas Corpus in Bahia state to liberate female chimpanzee Suiça, who lived isolated in Salvador Zoo. The pledge was approved, but when she would be released, she was found dead. Another case was with male chimpanzee Jimmy, who lived for more than 10 years in Niteroi Zoo. The state court of Rio de Janeiro considered it was unfit to judge him, since it was considered a federal matter, but IBAMA (Brazilian Environmental Institute) ended up closing the Zoo for mistreating in 2011, and Jimmy was released and sent to GAP Sanctuary in Sorocaba.

GAP Project International unconditionally supports this bold action in North American courts, started by Steven Wise and NHRP Organization, and urge all animal advocates to give full support to this historical action in the fight for Animal Liberation.