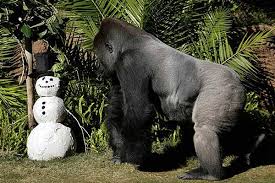 A snowman was put into the enclosure by the zoo, which aims to estimulate the animals to use their natural behavior (Photo: Nick Ut/AP-G1)

We hear this term “environmental enrichment” for over a decade. When we were looking for a place to learn about the management of adult chimpanzees and the construction of suitable enclosures, as long as our experience was with babies chimpanzees, we ended up coming to the Veterinary School of University of Texas, in a course of management of primates and the upcoming “environmental enrichment”.

After two weeks of training, we realized we had entered a Primate Torture Center, where 75 chimpanzees – some already retired, others still working – were subjected to medical experiments to develop drugs and vaccines against hepatitis , HIV , Malaria and other human diseases.

The enrichment taught was one to be used with hundreds of rhesus monkeys living in dozens of cages in a dark laboratory, where they were tortured day and night with all kinds of materials to be evaluated.

Enrichment consisted of small artifacts, they thought that functioned as toys, and some were use by the monkeys to hide food. The idea was that primates would occupy their waiting time between a medical experiment and another.

The concept has spread worldwide, and all zoos, to justify it was something different to combat the boredom of intelligent beings locked in small cages and enclosures and displayed to the public 8 hours per day, resulting in 16 hours in their dorms, began the promotion of “environmental enrichment ” as a solution to keep the mind of captive animals healthy.

“Environmental enrichment” has really no use and is based on the believing that animals do not have the slightest intelligence, and that it can put to them any food hidden in a room of a few square meters or toys that they will spend too much time looking for them. On the second day, they already know where everything is hidden, rather than handlers who waste their time in such useless tasks.

If the concern of zoos with the mental health of their innocent prisoners was serious, they would take simple measures like a five-time increasing of the area of the enclosures, leaving them in full freedom day and night so they can move and would suspend the harassment of the public close to the animals, giving them privacy zones where the public could not disturb them.

However, this does not matter to zoos, since the available area is restricted, the animals have to be near and in front of the public for consideration and harassed. When families grow much, the children are separated, causing deep psychological distress in young and distress in parents and in the rest of the family;.

If, in fact , those who manipulate the lives of thousands of primates in zoos and exhibitions in the world desire the welfare of the animals, they should regret of  deceiving them and us, pretending that they  generate happiness, end the public visitation, enhance enclosures substantially and leave them free in their territory, day and night . This is the best environmental enrichment for all the millions of animals who had  the cursed fate to live in captivity.