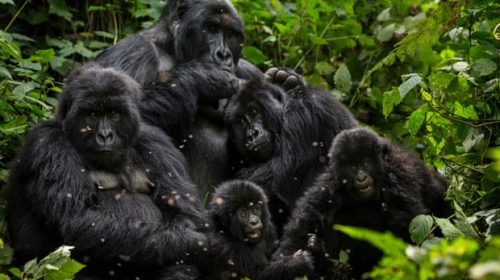 The coronavirus pandemic could wipe out populations of chimpanzees, gorillas and orangutans, leading scientists have warned.

Our closest living relatives, which share about 98% of human DNA, are known to be susceptible to catching respiratory diseases from people.

Even pathogens producing mild symptoms in humans have been lethal to great apes in the past. The fact that Covid-19 is fatal for some humans leads experts to fear it could potentially prove devastating to great apes.

No great apes have yet been reported to have contracted Covid-19, so the true impact is unknown. But many great apes are already at risk of extinction due to forest destruction and poaching, so the researchers say closing national parks, reserves and zoos must be seriously considered.

National parks in Congo and Rwanda have already shut to tourists and researchers, but the decision is not an easy one. Without a human presence, the risk of poaching rises.

“The Covid-19 pandemic is a critical situation for humans, our health and our economies,” said Thomas Gillespie, at Emory University, US, and a lead author of a letter from 25 experts published in the journal Nature. “It’s also a potentially dire situation for great apes. There is a lot at stake for those in danger of extinction.”

“People who are younger, who may be less at risk for severe illness from Covid-19, are the ones who are more likely to be hiking into the national parks of Africa and Asia to see great apes in the wild,” Gillespie said. “It would be extremely difficult to monitor whether they were infected with Covid-19 since they may not have obvious symptoms.”

Research in 2008 revealed the first direct evidence of virus transmissionfrom humans to wild apes. Since then common human respiratory viruses have caused lethal outbreaks in wild great apes that have become used to people. In 2016 scientists reported the transmission of a human coronavirusto wild chimpanzees in the Taï National Park in Ivory Coast.

In 2017, Gillespie co-authored a report showing that 60% of the more than 500 primate species worldwide are threatened with extinction, while 75% have declining populations.

The number of surviving mountain gorillas has been rising, with about 1,000 now living in the Democratic Republic of Congo and Uganda, and the species was moved from critically endangered to endangered. It is the only great ape believed to be increasing in number.

“But the recent gains could rapidly reverse if disease is introduced, so protection is key at this critical time,” said Cath Lawson, Africa conservation manager at WWF UK.

Action is also being taken to protect some orangutans, with the Sepilok Rehabilitation Centre closing in Malaysian Borneo. “This disease could be fatal for the already critically endangered orangutan: it is a risk that we cannot to afford take,” said Susan Sheward of Orangutan Appeal UK.

The latest guidance from the International Union for the Conservation of Nature says the distance normally kept between people and great apes should increase from 7m to 10m. It also says no one who is ill, or who has been in contact with anybody ill in the preceding 14 days, should be allowed to visit great apes.

The authors of the Nature article conclude: “We hope for the best but should prepare for the worst and critically consider the impact of our activities on these endangered species.”