Conservation: Hope for our gorillas 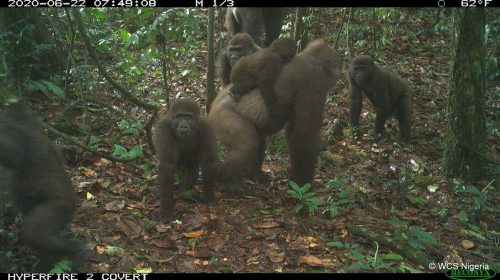 Arcus Foundation celebrates the population recovery of the Cross River Gorilla (a subspecies of the Western Gorilla) on Nigeria-Cameroon border. The first evidence was the never-before-seen footage captured in 2020 of a group of gorillas with several infants, an indication that the animals are reproducing and that the population is recovering.

The Cross River gorilla is the most endangered great ape species in Africa. They are extremely rare and was once considered extinct. But today, after the efforts of programs supported by Arcus, the count reaches about 300 animals in the wild. Point for conservation!

“I’ve studied these gorillas for over 15 years and I’ve only seen them once,” says Inaoyom Sunday Imong, director of the Wildlife Conservation Society’s (WCS) Cross River Gorilla Landscape Project, a key partner in the Cross River gorilla program.

This and other testimonies, in addition to various information, are in a new report released by Arcus – Story of Impact: Hope for Our Gorillas, which tells the complexity of the work in the region and demonstrates the importance of partnerships with the local population for success in conservation efforts.