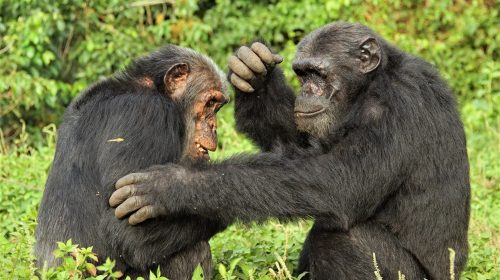 Why do we treat others ethically? Why must we treat others ethically? According to the moral framework of one of the major figures of the Enlightenment, Immanual Kant, we must always choose to act towards others as though they were ends-in-themselves, and not as a means for us to achieve our own ends. This obligation applies only between rational beings, which, for Kant, excluded non-human animals. Kant thought we should treat other animals well, but only for our own ends, since they are merely ‘irrational things’. In my MA thesis Chimpanzees in Kant’s Moral Landscape, I argue that Kant’s imperative to act in a moral way should include some, if not all, non-human animals.

In Kant’s view, only rational beings can be moral. We see evidence of our own rationality, and that of our fellow humans, in our behaviours, for example the use of language. I looked at Kant’s observations on rationality, and reconsidered them in relation to non-human animals, or more specifically, to chimpanzees. Kant explains how we perceive ourselves and others in time and space and understand ourselves and others rationally. A fresh look at his arguments finds that when we put aside our human-centric bias, Kant’s explanations apply equally to all creatures who navigate and articulate their environments. All such beings require a sense of the world and its contents, including a continuing sense of themselves in their environments.

In my research, I found examples of chimps displaying intentionality, executing plans, using language flexibly, acting in ways requiring productive imagination, and acting ethically in both captivity and in the wild – making choices and displaying behaviours where personal cost is paid for community benefit. Within their communities there were instances of chimps treating each other as ends-in-themselves, not in ways driven by personal preference – evidence of their moral potential.

Humans have used, and continue to use, chimpanzees for their own ends. We have used them in invasive and non-invasive research to find out more about ourselves. We kill them to eat and take their infants to be (for a short while) pets. We take their territories. We stare at them in zoos. We do all these things without exploring the concepts of human privilege (largely European privilege) that underpin our sense of entitlement.

Kant warned us to be aware of prejudices arising from those people we learn from, from the community we grew up in, or from the age we live in. He believed there were rational beings other than humans, and regretted he had no experience of them – he was blinded by the prejudices of his age to the many forms of rationality that surrounded him, and that surround us. We should not address our injustices to chimpanzees because they are ‘like us’, or because they are ‘our closest relative’, but because they (and many other non-human animals) are rational beings with their own rights and responsibilities. As fellow rational beings we have a duty to recognize chimpanzees as ends-in-themselves with the potential for morality. To place chimpanzees in Kant’s moral landscape, all we must do is ensure them the freedom to flourish there.

*Alyson Baker lives in Whakatū Nelson, Aotearoa. She is appalled by the predicted rapid path to extinction of so many animals, and also by the way many of them are treated, especially chimpanzees. Alyson volunteered at the Ngamba Island Chimpanzee Sanctuary, Uganda in 2017. She returned to Ngamba in 2018 and also went chimp tracking in Kibale National Park. She was planning to go back to the sanctuary in 2020, and to visit Budongo Forest Reserve in hopes of seeing the chimps who live there, but Covid-19 intervened. In 2021 Alyson completed an MA looking at our moral responsibilities to chimpanzees.