Cruelty against animals usually come from large developed countries, which have left, throughout history, trails of blood and suffering to millions of innocent beings.  The cages also come from there, as captivity was also invented in the world called more “civilized.” United States is the country that has the larger amount of captive chimpanzees in the world, possibly 2000 individuals, despite the deaths grow at breakneck speed.

In the early twenty-first century, we had the opportunity to see the construction of the first large cages for chimpanzees, the famous domes of steel, at Veterinary School of the University of Texas. Until then, the college housed the chimpanzees in 200 to 300 square meters enclosures with walls, where at least they could run and walk on the grass. When it was decided – possibly by NIH (North American Health  Institute),  the great sponsor of torture to chimpanzees in biomedical experience –  to take the great apes out of torture, the most sick, demented and debilitated, because of years and years in laboratory cages, a new jail was designed to keep them safely until they die, which would not take long .

Those super cages, dome-shaped, like the photos shown here, are totally contrary to the biology and behavior of a chimpanzee. But for NIH and its hired torturers, mattered little to them what chimpanzees think – if they believe chimpanzees think.

The chimpanzee put in those round metal domes, without privacy, with a very small space to exercise,  perishes in a tomb in life.

This absurd idea of North American great primates tortures did not prosper beyond their borders and only now appeared in a particular Argentine zoo in southern province of Río Negro, where the chimp Toti was kidnapped before a possible freedom due to a transference to a Brazilian sanctuary.

No chimp can live in those domes that are cold and cruel, exposed, or survive for long. That was their math: the faster they die, the better, since they are no longer useful for their economic purposes .

Toti will rely on the same “lucky ” and the ones who copied the American cage did not know – and not know – what a chimp is . It was much simpler to put any human being in it and calculate how much it takes to go crazy, than get depressed and die .

On the consciousness of those who condemned Toti to death without a trial, being innocent, responsibility for his death will fall in the future. 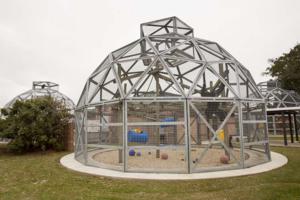 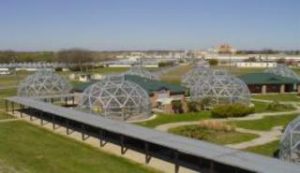