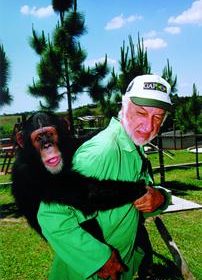 An announcement made by João Dória, state Governor for São Paulo, published a few days ago by Brazilian press indicates that a project is being set up to privatize the Botanical Garden, which has an annual deficit of four million Brazilian Reais, joining the São Paulo Zoo and Simba Safari Park , which operate together and generate a small surplus.

From an economic point of view it can be a clever initiative to get rid of an activity that is not profitable and join it with another that gives a small profit, like both zoos. However, everything in life can not be measured with maximum “profits and losses.” At the zoo there are hundreds of innocent lives, who are insanely kept in captivity for mere amusement of people who do not identify with the suffering of those living beings, who have rights to be preserved.

If we turn our eyes to overseas, we will see that the new policy today is not to privatize zoos, but to close them. Buenos Aires Zoo, one of the oldest in the world, considered traditional, located in a prime area of ​​the city, is in the process of being deactivated. The most iconic of the captive species, Sandra, a female orangutan, is about to be transferred to a Sanctuary in Florida. Mendoza Zoo, also located in Argentina, is technically closed and its most emblematic species, female chimpanzee Cecília, was transferred to Great Apes Sanctuary of Sorocaba, through a historic Habeas Corpus granted by an Argentine Judge.

Privatizing captivity is playing with the life and liberty of thousands of living beings in the hands of capitalist profit. If it was bad in public hands, it will be a thousand times worse at the hands of private exploitation.

More than 10 years ago, I wrote a letter to the Governor of São Paulo, Geraldo Alckmin, at the time, requesting the temporary closure of the São Paulo Zoo, due to an epidemic of death of primates of all species in that Zoo, to this day never explained clearly. The reaction of the Zoo Director, quite possibly with the agreement of the Governor, was to open a Defamation process against me and the GAP Project – a worldwide known movement, of which I was the President at the time and of which I am currently General Secretary.

This process is still open; the zoo has lost in all instances, but, using the immense variety of resources that our Justice offers, keeps it open, now in the Superior Courts of Brasilia, thinking that in this way they will prevent us from questioning the existence of that and other zoos, which , by this time of human civilization, should already be extinct.

My family and I keep on my farm in Sorocaba a Great Apes Sanctuary, which hosts chimpanzees and other species. We are not proud to have it; in fact we are ashamed that as intelligent human beings the only solution found to save hundreds of animals from exploitation and death in our hands was to lock them in another captivity, in which these innocents do not serve of trophy and fun of our race.

The deactivation of zoos is now reproduced in all countries and even in our country several of them are already being deactivated to be converted into leisure parks for the population, without animal exploitation.

Chimpanzees transferred to Sorocaba live in enclosures of thousands of square meters, are free within that territory, but they feel prisoners, as any intelligent being would feel under these circumstances. Although they are prisoners, they reject the exhibition, relate well to us, we attend them daily, but they do not support visitors. They also know that they are fun objects at the hands of their captors.

The dispute is not Sanctuary versus Zoo, both are captives and should not exist. The alternative is FREEDOM VERSUS SLAVERY. No animal, no matter the complexity of its species, was born to live captive. Human Rights do not exist just for us. Everyone on this Planet has the right to live in freedom in the natural area most appropriate to each species.