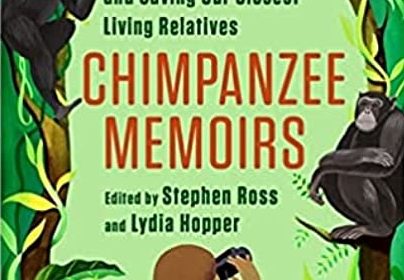 Who are the people who do chimpanzee research, rescue chimpanzees from appalling situations and secure them places in sanctuaries, care for the rescued chimpanzees in captivity? Stephen Ross and Lydia Hopper saw the generational turn-over among “chimpologists” and decided to document the stories of some of these heroes. The contributors are from many different disciplines, from different geographic areas, and are at different stages of their chimpanzee journey. The result is an inspiring collection, describing the people who work with chimps, how they embarked on their careers, the chimps they have worked with, what they have learnt, and advice they have for future workers.

The collection starts with Jane Goodall: “I began my research with only my instincts and common sense to guide me”. This approach, uncluttered by paradigms and prejudice, allowed Jane Goodall to see the richness of Kasakela chimpanzee community life at Gombe Stream National Park, Tanzania. This richness has enchanted generations of readers and viewers. As well as her path to, and work at, Gombe, she talks about her “Damascus moment” – becoming aware of the appalling conditions many captive chimpanzees were enduring in many countries. This was the catalyst for her starting to campaign for the rights of chimpanzees to live lives as close as possible to those they have been denied in the wild. Many of the contributors to the book cite Jane Goodall as the person who set them on their chimpanzee career paths.

Chimpanzee Memoirs is cram-packed with delightful anecdotes, interesting histories, tips for those hoping to find a career with chimpanzees, and discussion of the difficulties faced by those working for the conservation of chimps in the wild. It comes at its subject from so many different angles it forms a complex picture. Frans De Waal argues the importance of both field and captive research. Melissa Emery Thompson explains why long-term research is crucial when studying long-lived chimpanzees. Anne Pusey and Elizabeth Lonsdorf talk of the bias against women in the field. It is an engrossing read and Dawn Schuerman’s illustrations of the featured chimps are wonderful.

Some of the incidents described will stay with me for a long time. It is hard to choose which to share, but there are three I found illustrative of themes of the book – chimps in sanctuaries, chimps in the wild, and issues around chimpanzee conservation. A young chimpanzee, having experienced great trauma, is helped along her way to finding her place in a chimpanzee community in the seminatural environment of a sanctuary. An eight-year-old chimp plays games in the forest, games that indicate wild chimpanzees have a rich and complex inner world. And a veterinary expert focussed on her mission to help chimpanzees, realises that to do so she must widen her view of the range of people required for chimpanzee conservation.

When Ikuru arrived at the Ngamba Island Chimpanzee Sanctuary, Uganda, she was an “extremely sick and very distressed” infant chimpanzee. Lilly Ajarova, undertaking various tasks at the sanctuary at the time, took on the role of Ikuru’s surrogate mother. She cared for the young chimp while she was recovering, and she helped her become familiar with the forest and to integrate into the Ngamba chimp community. Ikuru joined the community as a low-ranking female, and she was badly bullied. One day Ikuru, having secured a piece of juicy jackfruit, sees Eddie heading towards her to steal it, and “Little Ikuru slapped Eddie across the face!”. Lilly Ajarova’s pride shines through in her telling of this moment – her girl has started to climb the community rankings. Lilly eventually became executive director of the sanctuary and is now the chief executive officer of the Uganda Tourism Board. She still visits Ngamba to check up on Ikuru and the rest of the chimps.

Richard Wrangham is known for his writings on male aggression in chimpanzees. However, what struck me in his contribution to Chimpanzee Memoirs were his descriptions of chimp Kakama, in the Kibale National Park, Uganda, finding a small log and carrying it around the forest like a doll. Kakama carries the log up a tree and plays with it while lying in a nest, supporting it by his feet, playing “the airplane game”. Then “Kakama made a smaller tree nest than I have ever seen a chimpanzee make, certainly too small to accommodate himself. It was the right size for his log, however. He lay the log in the nest. He then left the log and rested in his own nest an arm’s length away.” Was the fact that Kakama’s mother was pregnant, about to give him a sibling after eight years of being alone, connected to his choice of toy and play?

Caroline Asiimwe, head of veterinary services at the Budongo Conservation Field Station, Uganda, was confronted by villagers when she and her colleagues raced to a village after hearing of a fight between a cocoa farmer and a chimpanzee who had been raiding his crops. She and her colleagues “frantically asked where the chimpanzee that was injured was”. The villagers were disgusted that the arrivals showed no interest in the farmer who had also been injured. Caroline Asiimwe suddenly realised that “if we did not involve local communities and demonstrate that their lives are as important as the chimpanzees’, we would not achieve our conservation goals.”

Chimpanzee Memoirs is full of such first-hand experiences from people who have dedicated their lives to chimpanzees and their conservation. It is a wonderful and inspiring anthology. *Alyson Baker lives in Whakatū Nelson, Aotearoa. She volunteered at the Ngamba Island Chimpanzee Sanctuary, Uganda in 2017, and returned in 2018 when she also went chimp tracking in Kibale National Park. Alyson was planning to go back to Ngamba in 2020, intending to visit Budongo Forest Reserve in hopes of seeing the chimps who live there, but Covid-19 intervened. In 2021 Alyson completed an MA looking at our moral responsibilities to chimpanzees and she is currently working on a PhD.